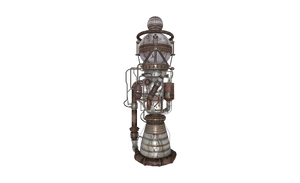 The Booster, as installed in the Engine Core.

The XMB Booster was one of two projects undertaken by ArcJet Systems related to the Mars Shot Project. It was a nuclear rocket designed to augment the Mars Shot's payload capacity and take-off thrust. The company was contracted by the USSA in July 2075, promising delivery of a completely functional rocket within two years. Under Dr Rory McClellan, the rocket was completed and installed in the engine core of ArcJet Systems in December 2076, ready for test fires. The final design came in at just 17 pounds under the USSA's specified weight limit, down from being a few hundred pounds over the limit due to the new uranium refinement system. Although switching to deuterium would have yielded a much higher burn-to-thrust ratio, the idea was vetoed by the company's CEO, as it would result in further unacceptable delays on the project, which already overshot its delivery date for the initial prototype by three months (August 2076).[1][2][3][4]