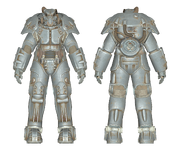 Commissioned by the Joint Chiefs of Staff, the development of the X-01 began shortly before the Great War.[1] It represented a radically new approach to designing powered armor, eschewing traditional design philosophies that defined the T series,[2] and was a high-profile research project meant to supersede previous power armor models. However, although the suit was technically functional by late 2077, it was burdened with numerous issues that precluded widespread use in the field. While the first test models were issued to Presidential bodyguards, the X-01 was never deployed in larger numbers.[3] A single suit of X-01 was provided to the Nuka-Cola Corporation, as part of Project Cobalt. While the suit served as a successful proof of concept of using a strontium-90 based plating over the armor,[4] this improvement was not adopted into the armor's schematics, before the onset of the Great War. Further development was made impossible due to the outbreak of the Great War.[1][5]

After the Great War, a select few suits were engineered further and employed by remnants of the U.S. military, like the Enclave and Brotherhood of Steel, as well as the Institute.[6] The schematics for the armor were saved by the Enclave just before the bombs fell, with the organization keeping copies in the archives of their Poseidon and Whitespring facilities. This allowed the Enclave to create a limited production run of the suits, and for work to eventually continue on the model's development.[1]

Full development was restarted by the Enclave in 2198, although it wasn't until 2215 that the research efforts began in earnest under Presidential mandate, resulting in the creation of the first model of Advanced power armor in 2220.[2] Another group to develop upon the X-01 design, after the war, is the Institute. Despite lacking access to the prototype's schematics, by 2287, the Institute had developed a modified polymerized casting mix to coat the armor, as well as other modifications that enhance the user's intelligence.[7]

The X-01 advanced powered infantry combat armor is designed for a single human operator, provided with the comfort and protection of a next-generation suit of armor. While the T-51 power armor relied on a lightweight poly-laminate composite shell for protection, the advanced model uses lightweight metal alloys as basis, reinforced with ceramic castings at key points. The resulting space savings allowed for reducing the armor's profile without compromising protection. Perhaps the most noticeable change was a completely new helmet assembly. The unusual, insect-like design features a pair of polarized eyepieces in place of the usual vision slit, providing superior battlefield awareness. The helmet's eye pieces also served as the suit's lamps, replacing the traditional single-lens attachment used in older models. The helmet's angled surfaces also help maximize the chance of outright deflecting projectiles and incoming fire.[8]

Classic power armor pauldrons were retired in favor of a "hump" that encloses the operator's head, significantly reducing the chance of enemy fire damaging the vital areas surrounding the head. The basic hydraulics system and servo-motors that provide the operator with enhanced strength are also high quality models, with improved performance as opposed to the original T-51b.[8] Additional features include an auto-gyro and the ability to lock them in position, allowing the suit to be stored upright (or the operator to take a nap while on guard duty),[9] an air conditioning system for comfort,[10] a radio headset[11], and an urine-recycling system carried over from the T-51b, allowing the operator to survive for weeks without water.[12] Despite these advancements, the X-01 suffers from severe design flaws that prevent it from seeing large scale deployment.[13] 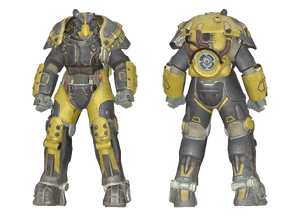 While all units of X-01 were experimental prototypes, this model represents the earliest functional version of the power armor suit, unfinished before the Great War. The schematics for the armor were saved by the Enclave just before the bombs fell, with the organization keeping copies in the archives of their Poseidon and Whitesprings facilities. This allowed the Enclave a limited production of the suits. 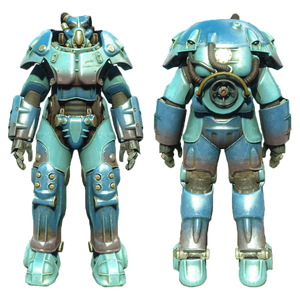 Thanks to strong ties with the U.S. military, the Nuka-Cola Corporation managed to secure a suit of the experimental X-01 Mk V armor just prior to the Great War. The company intended to use the armor as part of Project Cobalt, and to help promote their new Nuka-Cola Quantum soft drink. The corporation plated the armor in a compound made with the strontium-90 isotope used in the Quantum soda, allowing the wearer to more rapidly recover after physical exertion. Only 1 example of this variant was produced before the bombs fell and prevented any further production. 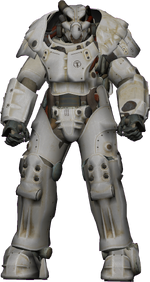 Centuries after the Great War, suits of X-01 were found by The Institute around the Commonwealth. The Institute developed a modified polymerized casting mix to coat them with, among other upgrades that improved the intelligence of the wearer. [14]