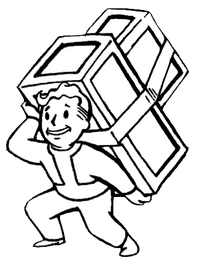 Weight refers to the measure of how much an item weighs in pounds, and how many total pounds the player character is carrying. Most items have a weight rating. The total weight the player is carrying is the sum of the weight ratings of all items carried, held, and worn. Carrying too much weight can affect a player's movement rate and movement abilities.

The Vault Dweller, the Chosen One, the Warrior and their companions, will be completely unable to carry more than their carry weight, making inventory management quite important in the later part of the game. However, if the Lone Wanderer or the Courier is over the weight limit (Over-encumbered), their movement is limited to walking speed and the player is unable to jump. Normal walking speed is not reduced for a player over the limit, so toggling the movement rate from run to walk has no noticeable effect.

Once over the weight limit the Lone Wanderer will also be unable use the fast travel feature, but being over the limit does not affect sneaking, combat, or any other normal gameplay functionality. The Courier is able to fast travel when over his or her weight limit, but only with the Long Haul perk. 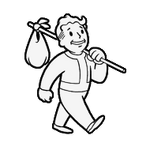 Most items have a weight rating listed in their description. Any item with a weight rating of - - has no weight, and therefore may be carried in any quantity without concern that it will contribute to the player being over the weight limit. To the Vault Dweller, Chosen One and the Warrior, very few items will have no carry weight, the most items most notable for having no carry weight are chems. However, for the Lone Wanderer and Courier, most ammunition, quest items, and chems have no weight rating. An item with a weight of 0 does have weight, it is simply less than a hundredth of a pound. In large quantities, this will cause a pound of weight to show up more than the sum of all other items with weight, a good example is Lead, which is usually held in large quantities and displays a weight of 0.00.

The player character moves very slowly if you are over the weight limit, Over-encumbered, so staying under it is a top priority. Here are some tips for staying under the limit:

For Fallout, Fallout 2 and Fallout Tactics players; pick a central dumping ground on the world map. You'll want the place to be safe, easy to get to and preferably somewhere near the center of the map. For Fallout Tactics players the BoS Bunkers serve this purpose, Fallout 2 players won't have a central map option*, but can use the highwayman, and players of the original can use the Hub, or (although remote), Vault 15. Using bags, sacks and other storage items will allow players to quickly stash a large amount of items.

For Fallout 3 and Fallout: New Vegas and players; use the many storage options to store items you wish to save for later in the game so you don't have to lug them around. If you don't yet have a house, explore the map to find a container such as a locker, box, or vending machine to use for temporary storage until you get a house.

In Fallout 3, there is also a Mailbox in Springvale that is near the spawn point, and can hold an infinite amount of storage goods, is able to be "decorated", and doesn't have the multiple load screens like the two houses you can own.

Plan your inventory before setting out. Travel light and take only what you expect to normally use. Check your total item weight before leaving for some action and become familiar with how much you normally carry, so that if you are over your normal rating you are alerted to the possibility you are carrying something you don't need. Consider these tips:

It is better for your sanity and game enjoyment to drop heavy items to ensure fast movement rather than poke along at a snail's pace. Here are some tips on how to drop items efficiently:

Note: items dropped on the ground in the Capital Wasteland have a chance of being picked up by non-player characters while you're away.

If you have no reasonable way to store items for later pickup while out in the field, and you don't want to drop things, fast travel to merchants to dump inventory. If you're in the Capital Wasteland, move near a discovered location on the world map and make note of your position before you leave, so you can return to the same spot. If you're in a zoned area, about the time you get a full inventory, find the nearest exit to the Capital Wasteland and do the same. Remember you can pop out to balconies or rooftops and still fast travel — you don't always have to go out the same way you came in.

Merchants have limited funds to pay for the items you are selling, and some are not available at certain times of the day. Underworld, Big Town, Megaton (Gob and Doc Church), and the traveling merchants are good resources for late-night sell-fests. Sell the heavier items first in case the merchant doesn't have enough to pay for everything you want to sell.

The game rewards a high repair skill. Encounter areas often have multiple enemies that are similar in kind, and which will carry similar weapons. When you reach the weight limit in the field, boost your repair skill to its max with clothing or drugs and repair items using other similar items. With a decent repair skill, for example, you may find yourself transitioning from 3 sets of raider painspike armor worth an average of 20 caps each and weighing a total of 45 pounds, to a single set of Painspike worth 100 caps and weighing 15 pounds.

Ant nectar, any alcohol, and Buffout all raise your Strength skill for a limited amount of time. You can use these drugs to temporarily increase the amount you can carry and maintain a fast movement rate. Fortunately, if you are under the effects of these drugs, you can still fast travel even if the effect would have worn off during normal travel of that distance. In that case, the effects will wear off once you emerge from fast travel mode.

The various types of power armor also boost your Strength and increase carrying capacity, but require special training to use.

(Fallout 3 & Fallout: New Vegas only) Most containers are world objects, and therefore, cannot be carried; however, despite what it says on the Grab page, enemies (and friends) that you kill in the wasteland are containers with infinite inventory, and can be grabbed. You can utilize this in partial, to bypass the Over-encumbrance mechanic. See the Fallout 3 exploits page for more details.