Watoga is an automated city in the heart of the Cranberry Bog in Fallout 76.

Financed by Atomic Mining Services, the Watoga project aimed to create a "city of the future" in Appalachia. All the civil services and municipal management needs would be handled by a variety of RobCo and General Atomics International robot models, from the RobCo Protectron to the General Atomics Mister Handy.[1] However, the city is older than it may seem: It was officially founded on April 2, 2042, by Watoga, Inc., built in the place of the cleared Watoga State Park forest. From its inception, the city was built with automation in mind and aimed to create one of the most democratic places of the planet by including a rather peculiar system of governance.[2]

The city was designed to be fully automated, with day to day operations of the city ran cleanly, efficiently, and effectively by carefully programmed robots. The only human element in governance was the mayor, chosen by the city's systems for a term of random duration. In theory, the system was intended to ensure that the mayor won't be hounded by special interests and corrupt enterprises trying to curry favor with bribes. Because no one in the government would be elected, and everyone would be appointed with term limits decided by the mayor, each mayor was free to hire and fire at his or her own discretion. Finally, the Watoga Constitution clearly grants the mayor's executive orders the force of law, with the single exception that no such law be made that curtails that authority.[2] To ensure that the whims of the mayor could be translated into legible laws, be they executive orders or a state of emergency, mayors were provided with MAIA, the Mayoral Artificial Intelligence Assistant. Programmed full of important and incidental information pertinent to the governing of a city, MAIA's knowledge database comprised decades worth of curated news articles, court opinions, and legislature from all 50 states, and even some older data dating back to the Middle Ages. MAIA was intended to provide the backup and expertise necessary to help mayors decide on a course of action (or simply provide options in case of total incompetence).[2]

Despite the good intentions, the system of governance proved to be fundamentally broken in practice. Mayors typically had no regard for society or the greater interests of a city, instead abusing their position to fix pet peeves, such as banning certain types of music, baby names, and eventually interfering with the government process by implementing executive orders establishing permanence of all measures passed by mayors and making MAIA pretend to ignore new measures to be proposed. The situation was further exacerbated by the problems caused by initiatives such as Plain Speech, which mandated that all executive orders be recorded and read in plain speech, exactly as they are spoken by humans. Naturally, this caused no small amount of problems and distress.[3] However, the most destructive element of the city was its elitism. Steep property prices excluded all but the richest denizens of Appalachia from purchasing real estate within the city. Of course, they had a vested interest in keeping the city to themselves and voted against any measures, no matter how reasonable, that could endanger their privileged status. This included arbitrary limiting of emergency fire services to just the city limits[4] and voting down proposals to expand the bus lines, in order to reduce the load on the monorail network. The latter illustrates the determination of the powers that be to deny the city to others: Reducing the burden on the monorail network would increase the stopping times and reduce the risk of a major collision that would shut the entire network down, but the safety increase would also make transportation to the city more affordable, allowing the "wrong" kind of people to visit it.[5]

While Watoga was founded in 2042, it took decades for it to bloom. Efforts only began in earnest shortly before the Great War. The city of the future became a joint effort between the federal government, RobCo, and Atomic Mining Services.[6] Atomic Mining Services and RobCo Industries could finally provide the kind of automation envisioned by the founders of the city. By 2077, Watoga became what it was promised to be, with RobCo particularly excited about the project. While AMS footed the bulk of the cost, they were convinced that footing the bill was in their interest: Having the RobCo name attached proved invaluable when dealing with the politicians and there was the added benefit of having a high-profile effort that deflects attention away from our other operations.[7] The funds meant that Watoga grew and matured, but as it did, the surrounding region withered. Prior residents were displaced and routinely rejected when they applied for citizenship at the city, with no option for being grandfathered in.[8] More concerning was the dissatisfaction among senior RobCo developers, most importantly Scott Turner, who grew dissatisfied with the elitist principles underpinning Watoga and set out to sabotage the city. The virus they eventually released into the network caused the robots to go haywire and start attacking everyone in city limits. Barbara Elizabeth, the 134th and last mayor of Watoga, made her final executive order after being shot by one of the robots and barely making it into her office. After issuing a general evacuation order, she stipulated that all who made it to the office would be made mayors, to try and fix the problem of rogue robots.[9] 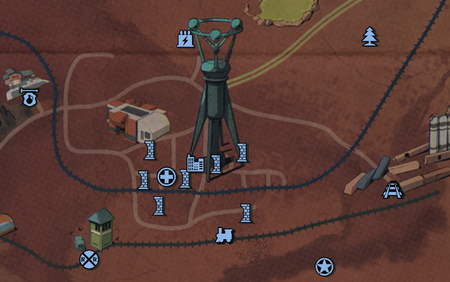