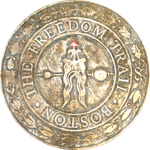 It's the 4th of July and the United States is celebrating its 241st birthday. We here at the Vault believe that it's cause for celebration - and what better way to celebrate than by walking the Freedom Trail? Yes, explosives work too, we know.

Notes on the Freedom Trail in Fallout 4

Boston is the birthplace of American independence and the Freedom Trail explores locations tied to that event. Many of them are recreated quite faithfully in the game, but there are some exceptions:

The images are shown in the order the real Freedom Trail follows them, including those that aren't explicitly marked in the game itself.