Vault 92 is one of the Vaults constructed by the Vault-Tec Corporation. It is located in Old Olney, Maryland.

The construction of Vault 92 started in May 2062 and finished six years later, in 2068. Designed to hold 245 occupants for a projected duration of 100 years, the Vault was outfitted with a General Atomics International nuclear power reactor and a Brainpower 7 computer control system. To cater to the musicians selected for inclusion in the dweller ranks, the Vault was provided with an ample supply of sound equipment, musical instruments, and recording gear to facilitate the protection of the musical legacy of mankind and the United States.[1]

Of course, the Vault also had a second, hidden mission. Once the Vault was sealed on October 23, 2077, Overseer Richard Rubin began implementing Vault-Tec Confidential Plan WNMSCE (White Noise Mind Suggestion Combat Experimentation), an experiment designed to test the validity of implanting combat suggestions in human subjects through the use of modulated ultra low frequency white noise. The first limited tests carried out on isolated musicians in the sound booths were a success, with the dwellers remaining oblivious, save for the occasional odd pitch and other minor discrepancies on sound equipment.[2] Relationships flourished, particularly the romance between violinist Hilda Egglebrecht and Parker Livingsteen, supervisor of the recording studios.[3][4]

The success of the field tests encouraged Rubin to proceed with the outlined experiment. Together with Professor John Malleus and Section 4, the Overseer extended the reach of the White Noise. The emitters were wired into loudspeakers throughout the Vault, primarily inside soundproof recording studios, where white noise was overlaid with music playback.[5] To ensure full exposure, Rubin blocked the distribution of personal sound players and headphones, to ensure that the musicians listen to music inside recording studios, with the white noise broadcast.[6]

Professor Malleus was oblivious to the true nature of the project and went so far as congratulating his team on a job well done, when these first large scale tests revealed that 33% of subjects that lapsed into a trance-like state under the effects of white noise allowed the team to implement subtle, minor tics to verify the effectiveness of the suggestion. The effectiveness was close to 100%,[7] with less than a 1% margin of error.[8][9]

However, the success was only temporary. Soon, the first problems manifested, as one of the musicians (designated Subject V920717) went insane, murdering three other dwellers in a bloody rage, forcing the security team to put him down. He was only killed after receiving 22 shots to the body. With no previous history of violence or mental instability, Professor Malleus began to question the effects of the white noise signal.[10] To the Overseer, however, the loss of life was negligible and the behavior of the musician proof of the projects importance. The man offered increased strength, tenacity, and unflinching obedience to orders from authority; What else did the post-nuclear world need from a soldier?[11] As such, the experiments were not suspended, even as the researchers autopsied the corpse to learn the source of the problem.[12] What no one knew is that the white noise signal was causing neurological changes inside the brains of the subjects, resulting in dizziness, nausea, and the gradual loss of higher cognition and motor control, sometimes leading to psychosis.[13][14][15] To make things worse, the entire Vault was turning out to be a death trap. The location selected by Vault Tec lay dangerously close to underground water sources, causing gradual deterioration throughout the Vault. Corrosion spread through the pipes and installations, causing leaks and other damage. However, the worst damage was taking place in the lower levels, where the wall deterioration resulted in stress fractures and crumbling of concrete walls. Although the technical team reinforced the walls to the best of their ability, they were fighting a losing battle.[16][17]

Against this grim backdrop, the tragedy of Vault 92 entered its next act. Within a month, another twelve incidents happened: Ten dwellers succumbed to the white noise signal's adverse effects, with seven fatalities; men torn limb from limb by once respected representatives of the musical profession.[18] Malleus pleaded with the Overseer to abandon the project and salvage the situation. The Vault, isolated from the devastated outside world, was on its own.[19] Rubin ignored the Professor's pleas, dismissing the deaths as a necessary sacrifice. However, to prevent the spread of "insanity" through the Vault, he implemented a command phrase in the signal: Sanity is not statistical. It was meant to provide the guards with an easy pacification method against citizens afflicted with white noise.[20]

However, this was not enough to prevent the situation from degenerating further. As 30% of the Vault's population (close to 70 people) was estimated by Malleus to be clinically insane and with 35 dead, the Professor deemed the entire experiment a failure. He believed the white noise inadvertently resulted in the degeneration of humans into savage, mindless brutes.[21] The solution was as desperate as it was daring: Malleus proposed abandoning the Vault completely, as the situation became untenable and outright dangerous for the rest of the inhabitants. But before they would go, the Professor needed to learn the truth.[22]

The Overseer refused to act according to the Professor's plans. Even as he realized the command phrase ceased to work and he lost control of the situation, he refused to recognize the fact that the Vault was already lost. Instead, he ordered his security force to kill Professor Malleus, in the vain hope that doing so would stop the violence from spreading.[23] Some inhabitants took it upon themselves to organize[24] and secure arms in the face of half the Vault going insane, but alas, it was too little, too late.[25] As the Vault crumbled around him and the orgy of violence reached its apex, Malleus learned the truth, from a mortally wounded security guard. He understood that the experiment he helped carry out was always controlled by Overseer Rubin. That the White Noise emitters were hooked up throughout the dorms, rather than just the studios, leading to exposure in sleep. No controls. No observation. Half the Vault dead, the other half divided between the lunatics and their victims. Malleus did the only thing he could: He confronted the Overseer, to make him pay for his sins.[26]

The Vault, the silent witness of the violence that transpired within, kept its secrets safe as best it could. With its maintenance crews dead, it succumbed to flooding from the underground lake. The once human shelter became a haven for all manner of animals and mutated creatures alike. An empty husk deep beneath the ground.[27]

The entrance to the Vault is located inside a rock formation northwest from Old Olney, with a raider farmhouse to the west and an Enclave outpost located south of the entrance. 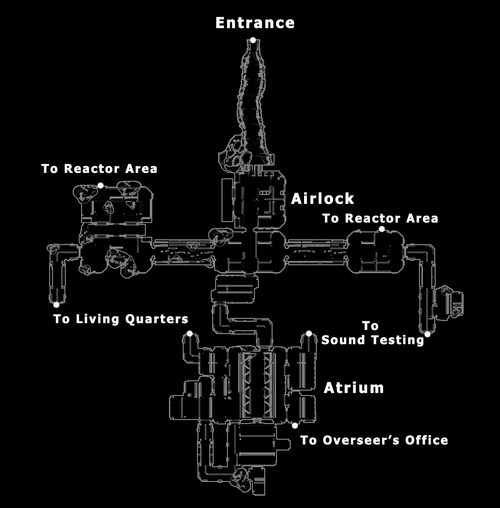 The entrance level is quite large. After the entry tunnel and the airlock with the first Professor Malleus audio log, the player enters a foyer. The door in front leads to the ruined atrium, while those to the sides lead, through tech corridors, to exits into the reactor level and the living quarters.

The atrium is completely ruined, with most of its facilities gutted. The lower level holds the remnants of the Vault's clinic and empty rooms. The upper level, with the catwalk, holds the old storeroom and a chamber with a security door leading into the Overseer's office. The entire area is overrun by bloatflies. 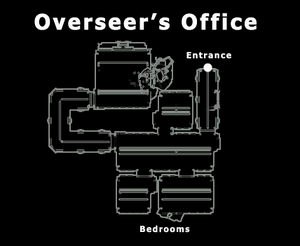 The office of the overseer is separated by a makeshift barrier and a corridor with adjoining bedrooms for the overseer and his staff. Inside the office is Richard Rubin's personal terminal, shedding light on the grim story of the Vault.

The passage under the Overseer's desk leads into the computer core inside sound testing. It can't be entered without a modfix, which adds an option to the Overseer's terminal to open the secret tunnel. 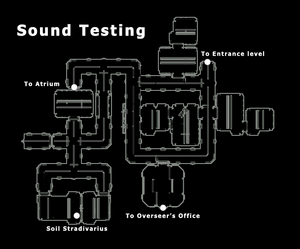 The heart of Vault 92's musical heritage, this is the sector where the musicians would hone their skills and teach their craft to their adepts. It's divided into two sections. The recording studio is located slightly lower, and consists of a recording booth, the studio itself (with the Soil Stradivarius still sitting there patiently), and a lounge, while the other part of the level is centered around the classroom. The classroom is equipped with a projector and a smaller studio for practice. Adjacent to it are workshops for maintaining instruments and the central core (inaccessible due to the damaged door; access can be gained via the Overseer's office). 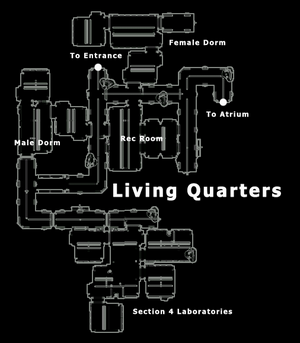 The living quarters are where the dwellers would sleep and Overseer Rubin would pour white noise into their ears. The area is centered around the recreation room, with male and female dorms ringing it. Each dorm consists of an entryway, the main sleeping area, a storage room, and toilets. Each is fitted with white noise emitters, which can be used to kill the mirelurks that now dwell among the wreckage.

A corridor near the male dorm leads deeper into the Vault, into the section 4 laboratories, where the white noise was developed and perfected. A terminal at the checkpoint can be used to activate the lockdown in the corridor, sealing it with locked doors (very easy locks) and filling the hall with purifying flames. 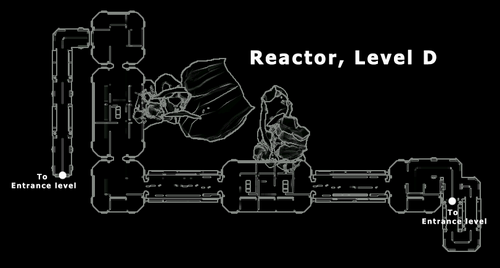 The reactor level is for all intents and purposes one giant corridor, stretching from one exit to the entrance level to another. The lowest level, D, is flooded, with Vault engineering logs in the southeast section.

Vault 92 appears only in Fallout 3.