For on the fateful day, when fire rained from the sky, the giant steel door of Vault 101 slid closed... and never reopened. It was here you were born. It is here you will die. Because, in Vault 101: no one ever enters, and no one ever leaves.

Vault 101 is one of the Vaults constructed by the Vault-Tec Corporation in the Capital Wasteland. It is located west of Springvale and northwest of the pre-War settlement of Megaton. It was the home of the Lone Wanderer until they left in search of their father, James.

It's not exactly known when the construction of Vault 101 began but it was probably constructed in the 2060s like the other vaults in Washington, D.C.. The purpose of Vault 101 in the Vault experiment was to test the role of the Overseer in a community that remains indefinitely isolated from the outside world. While the Overseer was able to interact and visit the outside world via radio transmissions and a secret tunnel from his sealed office, the rest of the inhabitants were told that Vault 101 was never sent an “all clear” signal, while faked radio transmissions described a nuclear-ravaged world gone mad, with absolutely no hope of existence outside of a Vault. The radio transmissions were actually recorded before the bombs even fell, and in many cases described a world even more horrible than the reality of the nuclear wasteland.[1]

To this end, Vault 101 was supplied with all the equipment it would need to keep functioning indefinitely like spare parts for the water processor, but the vault didn't receive a GECK, a piece of technology that can only be used on the surface.[2]

The first Vault 101 Overseer, like his counterparts in the other Vaults, was actually a planted Vault-Tec operative whose job it was to control the experiment from the inside. Aside from maintaining the fiction that the outside world was not habitable ruse after the Vault was populated and sealed when the Great War took place, the Overseer was meant to cultivate the isolationism, preventing anyone from leaving the shelter and using the faked radio transmissions to convince them of the folly of doing so.[1]

The second Vault 101 Overseer took over the reins after the death of his predecessor of natural causes in 2127. He maintained and developed the isolationist doctrine, convincing senior vault dwellers to become complicit in the vault experiment. The second Vault 101 Overseer was actually able to communicate with, and even visit, the outside world by using the secret tunnel in the Overseer's office. However, for all other intents and purposes, the vault dwellers were sealed in with the motto "we are born in the vault, we live in the vault, and we die in the vault".[1]

Although the fiction was maintained by his descendants, there was a deviation. In 2241, the new Overseer decided to send scouting parties to the outside and open the Vault. The survey team, led by Anne Palmer, left the Vault in February and reconnoitered the ruins of Springvale and the Megaton settlement, bringing back giant ant samples to the Vault for analysis. Most of the team returned on February 10, 2241, logging their reports. Lewis and Agnes Taylor, two other members, remained in Megaton to serve as contacts between the two settlements and to further survey the surrounding environments.[3] The latter eventually returned to the Vault.[4]

The progressive overseer has disappeared on an excursion into the wasteland between 2241 and 2258. He was succeeded at his post by Alphonse Almodovar, a firm believer in the need to maintain total isolation of the Vault (thanks to his parents, who were convinced that the Vault should have no contact with the dangers out there). Many suspected foul play, but they had little choice but to accept Almodovar's leadership. The new Overseer immediately set out to correct the perceived lapses in security.[5] Vault 101 was sealed, again, and the senior vault dwellers were sworn to secrecy. However, the isolation wasn't perfect. Between 2258 and 2259, the Overseer made an exception: to fill the post of Vault physician, he allowed an educated wastelander and his child to enter the Vault, swearing the man to maintain secrecy and raise the child as if they were born in the Vault.[6] Between 2265 and 2267, a female Vault dweller escaped from the Vault, reaching Megaton (though her whereabouts and ultimate fate are not known).[7] Another escaped in 2272, revealing to Colin Moriarty that Vault 101 was essentially brainwashing its residents.[8]

Within the Vault, life was stifled by Almodovar's firm grip on the community and brainwashing. With a strong, omnipresent security force, the Overseer instituted a cult of personality focused on him alone, as the protector and wise leader of the Vault.[9] James' outsider origin was a problem for Almodovar, one he sought to fix by assigning him Jonas Palmer as assistant. This decision would ultimately prove to be wrong.[10] Another problem were the Tunnel Snakes, a "gang" of juvenile delinquents. While the Overseer used them for dirty work, his permissiveness resulted in them becoming unruly and quite disturbing.[11] However, overall, Alphonse Almodovar managed to cultivate an entire generation of Vault 101 dwellers playing along with the vault experiments, keeping the secrets from their children. He and his cronies continued to receive periodic information from the outside world, while those not in the know were told that things had gotten so bad that whoever was sending transmissions was no longer able to do so, reinforcing the thought that leaving the vault was sheer suicide.[1]

The Overseer's regime suffered a terrible blow on August 17, 2277. James, the Vault physician, abandoned the shelter and their child to again pursue his dream, Project Purity. His opening of the Vault door led to a radroach infestation and the Overseer going berserk. The latter immediately confined all the dwellers to their quarters and ordered the security team to contain the outbreak - and shoot everyone found out of their quarters, especially the child James left behind. The security team's actions contribute to the chaos. The radroach infestation doesn't help. By the time James' child escapes the Vault, the list of casualties is quite large and includes Agnes Taylor (heart attack), Floyd Lewis, Vikki Hannon, Paul Hannon Jr. (all three succumb to radroaches), Jonas Palmer (died tortured to death by Stevie Mack) and several security officers (killed by radroaches or the child they were supposed to detain for questioning).[12]

The double escape and subsequent loss of life did not do wonders to the situation in the Vault. Quite the opposite: a faction of dwellers formed, demanding that Vault 101 be opened, to begin interacting with the outside world, set up trade relationships and allow the dwellers to come and go. Led by Amata Almodovar, this faction was opposed by her father, Alphonse, and his security force, who saw this as a threat to the Vault's "great mission."[13] His opposition was made stronger by the fact that he was contacted by the Enclave on a governmental frequency, who offered the Vault amnesty for unspecified crimes and reunification (they were unable to access the Vault, as Amata changed the access password). Almodovar ignored the request, treating it as confirmation of his isolationist policy.[14]

The rebellious movement did not subside. To the contrary, it grew, eventually sealing themselves up in a part of the Vault, demanding the Overseer's resignation. While the Overseer wanted to sit them out and wait until they voluntarily give up, his Security Chief wasn't going to. Instead, he planned a midnight raid into the rebel quarters, with live ammunition and zero tolerance, to subdue the movement by force.[15] Fearing that the conflict couldn't be resolved otherwise, Amata issued a call on the Vault 101 emergency frequency, calling the Lone Wanderer, now an experienced wastelander, to return to Vault 101 and help them. They may have resolved the crisis, either supporting the opening of the Vault to the outside world, or championing the isolation policy (effectively dooming the Vault to die due to a dwindling gene pool).[13]

What neither side of the conflict was aware of, the conflict that occurred when the Vault dwellers became aware of the habitability of the world outside and rebelled against the Overseer and his policy of isolationism was, in fact, the final part of the grand social experiment in Vault 101.[1]

Vault 101 consists of three sections. The player begins the game (after character generation is complete) in the lower levels and works their way up, to escape via the hidden tunnel in the Overseer's office.

Outside the vault there is a random encounter location. It has two spawn points. One down the road in either direction. It is activated by following the road south slightly past the elevated highway. 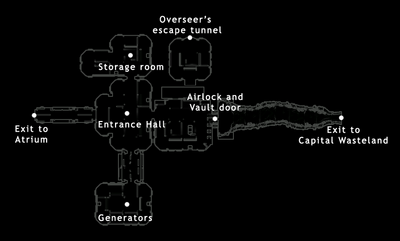 The entrance level. The player will be locked out of the Vault once the door closes during Escape!. This also marks the point where the player can remake their character: Activating the cavern door triggers the menu and if the player is satisfied, clicking done starts Fallout 3 proper. 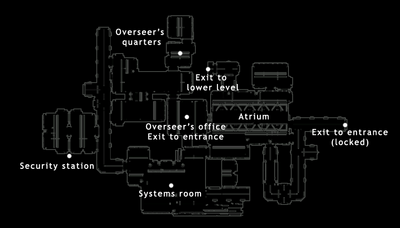 The Atrium level is the nexus of the Vault. The lower level offers little in the way of loot at the time of the Escape!, except for officers Richards and O'Brien gunning down the Holdens. The upper level holds the Overseer's office, systems room, ops, and the security station. The bodies of Jonas Palmer and Floyd Lewis can be found on the upper level. The escape tunnel is activated from the terminal in the Overseer's office and is hidden under the desk. 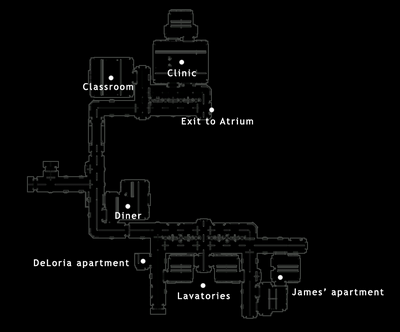 The lower level houses the living quarters, classroom, diner, and main access to the reactor area. Other facilities also include the cigar lounge and the clinic.