Trains were the backbone of infrastructure and transportation before the Great War, especially with the introduction of nuclear-powered technology. 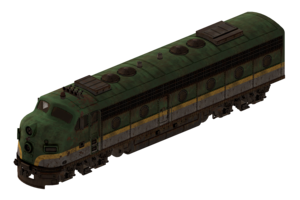 These sorts of trains can be found sitting idle on railroad tracks throughout the Mojave Wasteland. The locomotives appear to belong to the same railroad company, as they are all decorated with the same livery. 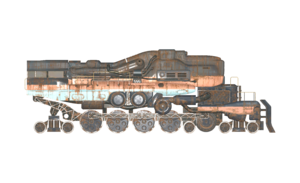 A curious, highly advanced design with an elevated driver's cab and the nuclear engine suspended high above the track. Although peculiar in design, it was effective and in widespread use across the Commonwealth and Appalachia. Some, if not all models, were even automated.[1]