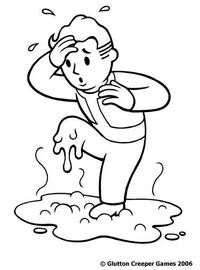 Toxic waste in the Fallout games is a dangerous hazard across the Wasteland.

Toxic wastes typically come in two varieties. The first acts as an impassable barrier, like that found near the Gun Runners fortress in Fallout. The second, which can be found in places like the toxic caves in Fallout 2, hinders the player character's movement and causes damage. This unfortunate effect can be negated - temporarily - through the use of rubber boots.

As a piece of setting, the toxic waste in the Fallout games is very nondescript. It's green and it's gooey . . . probably because toxic waste is generally described in pulp fiction as nondescript gooey green stuff. Often, the waste is heavily irradiated, such as in the Toxic Waste Dump special encounter in Fallout 2, but sometimes it's completely harmless. The Gun Runners apparently lived pretty much right in the middle of toxic waste for a long time without any extreme effects.

The liquid version of FEV used for dipping in the Mariposa Military Base looks a lot like plain old toxic waste. It's a bit more shiny, though.