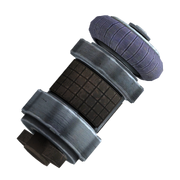 An electromagnetic pulse, commonly abbreviated to EMP, is a burst of strong electromagnetic energy. An EMP can be generated in numerous ways, from industrial accidents to specially-designed generators. However, EMPs are best known from their first documented source: nuclear weapons. As the primary effect of an electromagnetic pulse is the destruction of electronic components, there are some weapons that intentionally generate them and are used primarily against robotic targets. These include pulse grenades and mines in addition to several handheld firearm models.