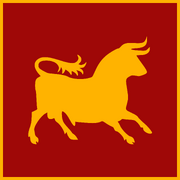 Caesar's Legion is an aggressive, imperialist organization, led and founded by Caesar. The legionnaires are a well-organized, jingoistic fighting force that, as of 2281, mainly operate east of the Grand Canyon and in Arizona, where its capital, Flagstaff, is located. The Legion is comprised mostly of reconditioned tribals and their young offspring.

Caesar chose to emulate the values and structure of Imperial Roman legions because he recognized it as a working template for a society equal to the challenges of a post-nuclear world, one that would prevent humanity from fracturing again and establish an age of stability, a new Pax Romana. In the words of its founder, the Legion is a nationalist, imperialist, totalitarian, homogeneous culture that absorbs everyone into itself, obliterating their previous identity.