"The missing head could be seen as in on as a joke from the fact on the teaser site Lincoln's head is shown as a virtual guide. "

That seems unlikely, these are all in-game models and I doubt they were edited for the sake of teaser-related jokes.

It's possible it's a Simpsons reference, but even that is just speculation

Perhaps best to keep the idle speculation out? - Brother None

A. sign your stuff man B.I was saying how the site was referencing the joke that the head is missing in the game but his head appears in the site C. which simpson's ep? Vault009Dweller 20:28, 20 September 2008 (UTC)

Mang I need to sign my stuff? It says Brother None in the edit list. B. I don't think that's an intentional joke. C. Bart steals the head of Jebediah Springfield statue in Theft - Brother None

I removed the speculation. And yeah, it's best to sign your stuff so that you can see who wrote what on the talk page without going through the page history, especially if more than 2 people do the talking. You can sign+timestamp your messages using ~~~~ (four tildes). Ausir 21:08, 20 September 2008 (UTC)

A. 1) mang? 2) All I saw was new edit on Talk: Lnicoln Memorial. B.look at this all the other buildings named after presidents NO head on map, but Lincoln's...has a head on the map how ever in the actual in game building no head which is sort of a joke if you think about it. C. how dose that relate to Lincoln or this game it could be that the head was just blown off during the blast of a the Great War it never says anyone stole it-Vault009Dweller 21:15, 20 September 2008 (UTC)
Side note: Jefferson's statue is in the actual Jefferson building before you say "Lincoln is the only one who has a statue of him in it" Vault009Dweller 21:18, 20 September 2008 (UTC)

Do the slaves actually [eventually] repair the monument or do they just claim to while actually doing nothing and are there prerequisites for e.x. you have to give all the Lincoln artifacts to Hannibal. ~Cheize 04:48, 15 November 2008 (UTC)

They do fix up the statue only, im sure a mod will be out sooner or later that will repair the entire Mall then the entire wasteland but thats beside the case right now, they do repair the statue and set up tents outside. You get paid caps for the artifacts given to Hannibal, you can also then kill Hannibal then take all the artifacts then give them to Abraham in Rivet City. Codyz 17:53, 2 December 2008 (UTC)

How to get there

i am having a hard time getting there can anybody help?

Sandbags as an item?

has anyone else found items called sandbag(s) around the memorial? i've found a big stash of them there but i dont know if it is a mod i have or not

can anyone tell me if they got them there to?

Well as it would be , he had more to do in paradise falls a few game days later

who should be there but

The one guy he let live, who promtly fingered him and the whole place turned hostile , anyone else have this happen

Paradise Falls turns hostile whether or not one of the slavers lives. Once you attack a Slaver (certain exceptions apply, but not to the Lincoln Memorial), your days in Paradise Falls are over, even if there's no logical way for Eulogy to ever find out. Kris (talk) 04:25, July 15, 2010 (UTC)

Errors on the monument?

According to http://www.nps.gov/linc/historyculture/lincoln-memorial-myths.htm there are no errors on the monument, except for the fixed F. Anybody have a pic of these other supposed misspellings that the game doesn't have that the real one supposedly does? 184.99.162.180 19:07, September 2, 2010 (UTC)

I don't think there are any errors. Here are three pics I took in DC in July of 2011 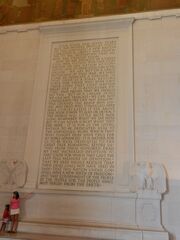 Gettysburg Address From the Lincoln Memorial

Panels 2 and 3 (of 3) from the 2nd Inaugural in the Lincoln Memorial
Retrieved from "https://fallout-archive.fandom.com/wiki/Talk:Lincoln_Memorial?oldid=1536329"