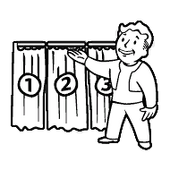 Tag skills are the player character's specializations. At the start of every Fallout game, the player chooses three Tag skills which will be their specialties throughout the game. The Tag! perk allows you to pick an additional, fourth tag skill later in the game.

In Fallout, Fallout 2 and Fallout Tactics, tagged skills increase at double the rate of an untagged skill (i.e. One skill point translates to a 2% increase in the skill). In Fallout 3 and Fallout: New Vegas however, a tagged skill only gives an initial 15 point boost.

Tag skills are a vital part of the Fallout universe because they essentially dictate what type of character you will play. A fighter will tag combat skills whereas a diplomat may choose speech, barter and science. A well-rounded character usually includes at least one diplomatic and one combat skill.