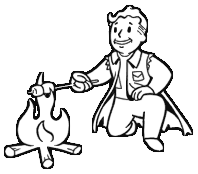 Is the struggle of this world merely a pleasant game for you?
Do you long for a more brutal take on a life lived post apocalypse?

If you answered "Yes and yes!", Survival difficulty is for you!

Survival difficulty is one above Very Hard difficulty. It can be switched to at the start of the game or at anytime the player wants during their playthrough. However, once deactivated on any save file, survival mode cannot be activated again for the rest of the game.

In an late April 2016 update, Survival difficulty was overhauled to be more similar to Hardcore mode from Fallout: New Vegas where the player will have to keep track of their Sleep, Hunger and Dehydration as well as watch out for diseases and other dangers of the Commonwealth. The table below summarizes these differences in more detail.

Before the update, Survival difficulty was very similar to Very Hard difficulty. Both difficulty settings halved the player's damage output and doubled the damage output of enemy NPCs when fighting the player. The only differences between Survival and Very Hard was that health restoration from all sources was reduced and Legendary creatures appeared more often.[1] However, with the update, once one regresses to an easier difficulty, they cannot return to Survival difficulty again for the rest of the game.