Springvale is a ruined town in the heart of the Capital Wasteland, notable only for the fact that Vault 101 and Megaton lie right next to it.

A small hamlet on the shores of the Potomac, the sleepy Springvale was big enough to warrant having its own elementary school, providing excellent education to its pupils.[1] Its small size and location in a mostly rural Virginia region made it the perfect spot for a Vault. Construction began in the 2060s and local families petitioned Vault-Tec Industries for places in the Vault. At least one, the Gomez family, was accepted before the Great War[2] destroyed humanity and Springvale with it.

For decades, it lay abandoned, remaining on the maps only because of its proximity to Megaton. In 2241, a survey team, led by Anne Palmer, from Vault 101 explored it, reporting that it was an abandoned ruin; An apt description of the derelict town.[3] It was repopulated (if one can call it that) in 2277, by a raider war band under the leadership of Boppo. After Sheriff Lucas Simms disposed of the raider leader during his failed raid on Megaton, the new leader turned his sights to Vault 101. From their stronghold at the Springvale Elementary School, the raiders attempted to tunnel into the underground bunker, only stopped by an infestation of giant ants.[4]

After the defeat of the Enclave in the Battle of Project Purity, extremists from the Church of the Children of Atom formed the Holy Light Monastery in one of the ruined buildings, preaching irradiation as the path to religious liberation. Lyons' Brotherhood of Steel would also begin to run regular water caravans through Springvale, bringing a measure of life to the desolate town. 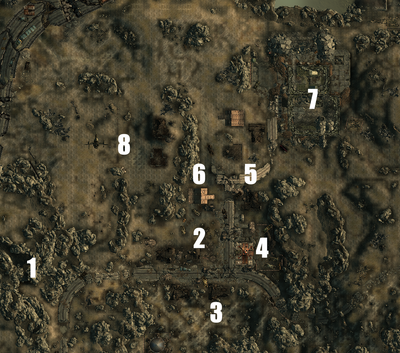 Springvale is a small, rural town, or rather, the ruins thereof. Most of it has been picked clean, although there are goods to be found across the little town. Springvale Elementary School lies at the northern edge of the town, on the shores of the Potomac River, while the west-south round marks its southern boundary. Megaton lies a short walk to the south, visible from almost any point in the town.

The town is devoid of any actual inhabitants, except for Silver, who camps out at the small ranch. Outside the house, travelers can run into giant ants and vicious dogs, as well as an Enclave eyebot. On the northern end of the town, the raiders occupy the ruins of the Springvale Elementary School, using it as a staging area for caravan raids. Traders from Canterbury Commons will also occasionally enter the town on their way to and from Megaton.

Following The Waters of Life, an Enclave field research team will set up an outpost northwest of the town to study local fauna.[5]

After Take it Back! (if Broken Steel is installed), the aforementioned Children of Atom extremists, the Apostles of the Holy Light, establish a monastery in the ruined basement of the house closest to Megaton.

Springvale appears only in Fallout 3.