The Vault - Fallout Wiki
Register
Don't have an account?
Sign In
Advertisement
in: Fallout setting, Fallout, Fallout 2,
and 3 more 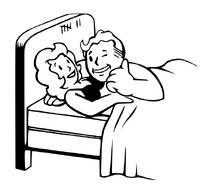 Sexual intercourse, frequently abbreviated to just sex, refers to a variety of acts undertaken between two creatures for the purposes of pleasure, procreation, or both. It is common among species both regular and mutated, although only humans ascribe any specific cultural, political, and religious meaning to the act and its consequences or outcomes.

Species that engage in sexual intercourse exhibit a variety of behaviors and humans are no different. Sex serves a variety of purposes in human society: Bonding, procreation, simple pleasure, or generating income. The choice of partners is also a significant element of an individual's life and may have repercussions depending on their culture: Heterosexuality is most common and most widely accepted, while homosexuality and bisexuality are less common and social acceptance varies, sometimes greatly.[1]

Humans may also seek partners, both sexual and romantic, outside of their own immediate species. The practice is surprisingly common.[2]

Human societies place a great deal of importance on sexual relations. Although the Great War has naturally loosened social norms related to sex, the emergence of distinct cultures in the wasteland has resulted in new social norms that aim to regulate human sexual behavior for a variety of purposes.

Sex plays a generally marginal role in the Fallout series, although the benefits are entirely situational.

The star is the formula is for sex perks, the following of which grant these bonuses to the formula check:

if you have Kama Sutra Master

if you have Sex Appeal

if you are a Sexpert

How Fallout 2 gauges the level of sex: