Citizens who need help with menial tasks come here to have a Servant assigned to them for the day.

Servant Allocation Center is the center of all Servant matters within Vault City, headed by Barkus.

The center handles every conceivable Servant matter, from start to finish. The citizen in charge is authorized to purchase new slaves (or Servants, in Vault City's doublespeak) from traders and visitors to Vault City, with the new purchases immediately dragged off into cells in the center. Of course, it also processes slaves acquired through other means, such as outworlders arrested in the courtyard, refugees from raider attacks, or slaves delivered from the Den.[1]

New slaves are usually first sent for medical testing and re-conditioning.[2] Once the process is completed and the new servant is trained, Citizens may request a servant to be assigned to them for a day.[3]

While Barkus officially professes to be a loyal Citizen of Vault City, his duties as a slave master make him easily corruptible... Provided the right amount of money exchanges hands. 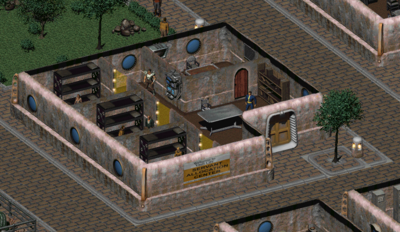 A free standing building, the Servant Allocation Center consists of the main area with the entrance, where Servant-related business is typically conducted, with a separate office belonging to Barkus at the back and three force field-locked cells for prospective Servants on the opposite end of the building.

A single guard is present on site to supervise the people incarcerated in the center, equipped with a club and tranquilizers.

The Servant Allocation Center appears only in Fallout 2.