Before the War, this served as the primary private school for the D.C. area. After the bombs fell and the dust settled, the Vault 87 super mutants came and set up shop in the ruined buildings and surrounding areas. 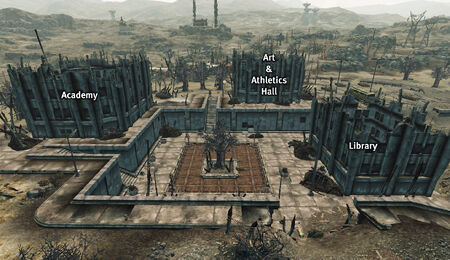 It consists of three main buildings: Roosevelt Academy, Roosevelt Library, and Roosevelt Arts and Athletics Hall. Maintenance Tunnels and Evacuation connects the three buildings via a subterranean route. The tunnels are patrolled by centaurs and super mutants. The super mutants have two captives tied up behind locked doors.

It is recommended that the player clear out the three attached buildings before releasing them, if they are to stand a chance at surviving after being rescued. There are several gas leaks throughout the complex of tunnels as well, so pay attention to where and when you are shooting. The tunnel's Library entrance is hidden underneath a trapdoor which is activated by an electrical switch on the wall.

Higher level players with Broken Steel can find super mutant overlords throughout the site. This is one of the most concentrated areas in the game concerning super mutants. Lower leveled players (under Level 10) can be easily overwhelmed in a matter of seconds.

The main Roosevelt Academy building houses the school's administration, classrooms, and nurse station. The main hall is accessible from the south entrance and enters directly north into a long hallway that connects the adjoining classrooms like a spine. The building has three levels and plenty of more or less intact rooms to explore.

The Hall centers around a large performance hall, where disused, decaying sets still litter the scene after two centuries. Two corridors run the length of the building on opposite ends, terminating in supply and boiler rooms. The top floor is accessed through a stairwell, and offers a large locker room for looting.

The smallest building, the only surviving part is the entrance hall. The rest of the building is buried under tons of rubble.

A maze of tunnels connects all three buildings together. Generally, the entrances are located at the bottom ends of stairwells.