I am a top-of-the-line model with an efficiency rating that makes a Mr. Handy look like a glorified toaster oven. When given a set of instructions, I will complete them without question and without error.

The Robobrain is a next-generation cyborg appearing throughout the Fallout series. Developed by General Atomics International with the assistance of RobCo Industries,[1] the Robobrain was designed from the ground up as a multirole platform for use by military and civilian clients. They are more flexible and powerful than robots due to the fact that their central control and processing unit is an actual brain, rather than an artificial facsimile.[2][3] Coupled with a robust, all-terrain tracked chassis and powerful armaments, the Robobrain was on the forefront of a new revolution in combat robotics. 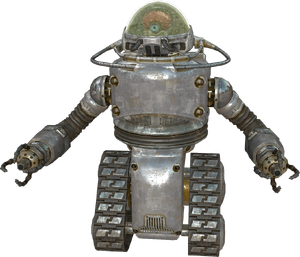 Developed shortly before the war by General Atomics International with assistance from RobCo Industries,[1] Robobrains were a top secret military project, taking place in facilities secreted away from the prying eyes of the public. Some research occurred in military bases under full military control, like the Sierra Army Depot.[4] Others were hidden in plain sight and operated as part of a military-industrial complex, as is the case with RB-2851, constructed under Eagle Hill, East Boston. Operated jointly by General Atomics, RobCo Industries, and the United States Army's Robotics Division,[5] the facility was strictly compartmentalized and most soldiers stationed on location were not informed of the nature of the activities taking place within its confines.[6][7][8]

The secrecy was necessitated by the revolutionary marrying of biological and mechanical components: Using a living brain as a control and data storage unit, tremendously increasing performance and blurring the line between man and machine.[2][2][9] Until its closure, SAD experimented with developing a new kind of cybernetic brain explicitly designed for use in Robobrains, while RB-2851 focused on manufacturing and iterating on existing solutions. Although the first brains were procured from primates (typically chimpanzees),[10] human brains soon proved superior. Many were taken from executed criminals, military prisoners, and other hapless subjects.[11][12][13][14]

The process was not as simple as simply de-braining humans and placing their gray matter in biomedical gel. The Robobrain was supposed to be a perfectly obedient soldier, devoid of free thought or individuality. Each candidate for conversion was carefully selected to obtain a specimen that can provide the desired increase in decision-making, while eliminating the aforementioned flaws.[15] Candidates were drawn from military and civilian prisons, focusing on adults of high intelligence and sufficient constitution to survive brain removal. Low intelligence, mental disorders or their risk, or general poor brain health usually resulted in termination, while qualifying candidates were given time to gain constitution and then debrained.[16][17][18][19][20] The donor was strapped down in the machine, which then proceeded to sever all connections between the spinal cord and the rest of the body, then opened the skull and extracted the brain together with the cord, transferring it into a specially-prepared jar with biomedical gel.[21] The traumatic nature of the removal necessitated further processing. The brain's memory centers were flushed by technicians and each underwent subsequent examination by a trained psychologist to verify viability. Some brains were resistant to the CODE Conditioning Protocol[22] used to wipe them, resulting in their original personalities persisting (resulting in termination).[23] Brains could also be damaged during the extraction resulting in impromptu lobotomies (and termination).[24] Ideal results had no recollection of their previous life and were responsive enough to qualify for final insertion, assembly, and assignment to field duties.[25][26]

Although they were considered one of the most advanced cyborgs ever created, Robobrains never reached full production status.[27] Persistent problems with aggression and violence even in properly CODE-conditioned robobrains,[9] Until its closure, SAD experimented with developing a new kind of cybernetic brain explicitly designed for use in Robobrains, while RB-2851 focused on manufacturing and iterating on existing solutions. Although the first brains were procured from primates (typically chimpanzees),[10] persistent equipment failure in brain extractors that were incapable of working at an industrial capacity,[21] and flaws in the immature technology used to manufacture Robobrain chassis resulted in a limited trial run. RB-2851 alone managed to complete three batches, with a further two planned. Each batch provided superior upgrades to the robot, including increased energy efficiency, maintaining brain longevity, improved visual cortex connections to enhance motor skills and perception, and tactical combat capabilities.[28][29][30][31][32]

Units deemed combat-capable were assigned on a provisional basis to select locations across the United States, for security and janitorial duties. These included the Sierra Army Depot, Mariposa Military Base, and the West Tek Research Facility on the West Coast and other locations in the East.[33][34] Some private companies closely affiliated with the government did receive a limited number of completed Robobrains for security purposes, like the Vault-Tec Corporation.[35] 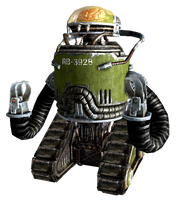 The Robobrain's chassis is a large, bulky cylinder with two continuous tracks providing mobility, powered by dual 40 horsepower motors), attached via a flexible or fixed mount. The torso is heavily armored, containing the internal power plant, sensors, and storage. The central processing unit, the brain, is located in a dome mounted on top of the chassis. A pair of flexible extenders emerge from the sides of the torso, with manipulators that boast opposable claws. Together with very precise servomotors and rotator mechanisms, they enable the robot to manipulate its surroundings with extreme precision, including the operation of human weapons (typically assault rifles or submachine guns) and devices designed for human hands. The chassis also contains robust monitoring systems.[36][37][38]

The dome containing the brain is filled with biomedical gel to preserve the brain, with armored glass providing plenty of protection. However, it can still be damaged, disrupting the brain/machine connection, activity within the brain, or cause depressurization and leaking of the contents, all of which are serious problems without qualified maintenance personnel.[39] If the proper seal is maintained, the brain contained within can be expected to last for centuries.[40] The main chassis is very sturdy, with armor plating installed to protect the hydraulics, relays, and other crucial instrumentation (such as the auto gyro sequencer, hydraulics, restrictor coils, relays etc.). The primary power supply was also contained within the shell, alongside reserve power systems that would engage in case of fluctuation in the main power supply.[41] More advanced Robobrains were capable of self-repairing to full condition, if given enough time.[38] The hull also contains sensors which provide the robot with high resolution imagery of their surroundings. These are quite complex and include imaging scanners, backup infrared sensors, and auto-tracking functionality. Robobrains can also lock-on targets for increased accuracy.[42]

Finally, to simplify communications with controllers, Robobrains were outfitted with audio receptors and voice modules, allowing it to receive, interpret, and mimic any normal human voice. Though the technology matured thanks to its inclusion in Mr Handy units, it still had its quirks.[43][44]

Properly processed Robobrains were supposed to be devoid of personality. The removal process prevented personality retention,[45] while subsequent conditioning with CODE and installation of neural inhibitors ensured compliance and permanent removal - at least in theory. In practice, human brains proved resilient to wipes, persistently attempting to preserve a sense of self.[44][46] Without regular wipes and maintenance, a Robobrain would develop an ersatz personality, typically of the violent, criminally insane variety.[47] A minority could develop more intricate personalities, capable of higher thought processes.[48]

However, what was a flaw in combat robotics was found useful in certain extreme life preservation experiments.[44] While Robert House was unwilling to undergo conversion, a group of pre-War millionaires funding the construction of Vault 118 on Mount Desert Island elected to go through with the idea. Their bodies were carefully preserved, with brains installed in late model Robobrain chassis, stationed at the Vault. By programming the voice synthesizers to use their original voices, Bert Riggs, one of the Robobrain developers, attempted to allow the brains to preserve their owners' original personalities and minds. While he did succeed on the surface, the side-effects dreaded by Robert House manifested more subtly. The usual symptoms were repetitive, delusional behavior, disconnect from reality, and distortion of perception.[49]

The array of features greatly depends on the on-board software. Most onboard programs date back to the immediate pre-War era, like Sensors '76. Other software examples are Facility Maintenance v2.1, Movement v4.8b, Repair v0.8a, Pest Control v1.4, and Hearts v1.0 (installed on Robobrains deployed in the Mariposa Military Base).[50] Reliability and longevity were key concerns for programmers: For increased performance and reliability, the main robotic OS would reroute functions from damaged subsystems.[51] To organize and coordinate robots in a facility, General Atomics International typically set up a wireless local area network matrix, where robots are slaved to a master computer intelligence monitoring their activities and adjusting parameters in response to human commands or changing circumstances.[52]

Combat was handled by a separate set of routines. When a Robobrain enters combat mode, it engages a full suite of combat software focused on terminating hostiles. The Robobrain continuously calculates combat odds and battle events, including computing threat levels, scanning enemy capabilities, determining optimal attack ranges, and accounting for other critical elements of combat.[53] In general, while the Robobrain relies on pre-loaded attack patterns (like pattern Omega) and sequences in combat,[54] it will adjust its tactics, recalibrate targeting sensors and scanners on the go, and correct firing data.[55] In situations where battle analysis determines that the engagement cannot be won, the Robobrain will engage its self preservation programming and attempt to break contact and evacuate. Retreating destinations typically specified factories or military assembly points.[56]

The Robobrain is fully capable of using weapons designed for humans, provided they are large enough. Typically, Robobrains would be provided with military-grade assault rifles, like the AK-112 or sharpshooter weapons, like the DKS-501, benefiting greatly from the computerized accuracy of a Robobrain.[57] Certain models were also outfitted with built-in laser weapons, integrated in the manipulators. Their firepower was comparable to an AEP7 laser pistol. Finally, Robobrains were also equipped with an integrated Mesmetron for subjugating enemy combatants[58] and aiding in the process of interrogating prisoners (though the technology was experimental, due to the risk for spontaneous cranial eruption).[59][60]

The basic Robobrain model spread throughout the United States vary in capabilities and looks, though the underlying model is largely the same. West Coast Robobrains deployed in the West Tek Research Facility, Sierra Army Depot, or the New California Republic were typically provided with human weapons for combat. However, rogue Robobrains that were not sealed in an installation or maintained by human groups usually lack such weapons and rely on their integrated armaments. It's not a general rule, however, as some outfits do not issue weapons to salvaged robots.

The purpose of a Robobrain can be determined by its paint job. For example, military Robobrains are painted in olive green and have their alphanumeric serial number (RB-xxxx) sprayed on their shell.

A design created by the Calculator, the humanoid brain bot chassis is designed to interface with an extracted human brain, complete with eyeballs and spinal cord. It is humanoid in shape and towers above regular humans, with heavy armor plating and integrated weapons (a .50 heavy machine gun, rocket launcher, and clawed fist) provided for combat. It was custom built for the kidnapped Eastern Brotherhood General, Simon Barnaky.

A special type of Robobrain, the Think Tank has been developed in the laboratories of the Big MT and represents the pinnacle of this kind of technology. All of its components are miniaturized, it can float like eyebots, while the brain is suspended in biomedical gel and able to interface with the chassis simultaneously. For communication and orientation, the Think Tanks have three forward facing monitors that display a rough human face (eyes and a mouth) and double as optical sensors.