Ranger station Foxtrot is a Ranger outpost in the Mojave Wasteland.

Located directly north of the Red Rock Canyon, nestled at the foot of a radio mast in a dead-end mountainous gulch. Although the station is only accessible from Highway 157, it is used to monitor the activities of the Great Khans.[1] The small outpost itself is reasonably well-run, however the remoteness and tedium around the camp have led to a higher than average scotch consumption rate. With scotch bottles being left around camp.[2]

This outpost is only accessible by following Nevada State Route 157 up the Spring Mountain range. The trail that leads from the road is directly east of the Silver Peak Mine, from there it leads south. The camp itself is nestled in the dead-end gulch. 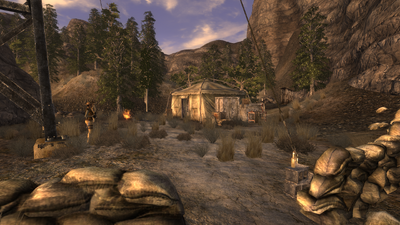 The camp has one tent, set up at the foot of the radio mast, with a campfire in front of it, surrounded by sleeping bags and bedrolls. A reloading bench is set against the tent wall outside. Rangers in need can use the outhouse in the back.