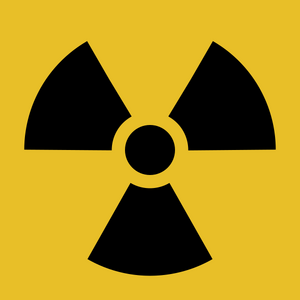 Ionizing radiation is any form of electromagnetic radiation that can detach electrons from atoms or molecules, ionizing them. Radiation is made up of energetic subatomic particles, atoms moving at high speeds, and electromagnetic waves on the higher spectrum of energy. Due to its nature, radiation cannot be detected by human sense, requiring special instrumentation, and is used in a variety of applications both civilian and military. However, exposure to ionizing radiation results in damage to living tissue or hazardous mutations.

For the real-world effects and nature of ionizing radiation, see Wikipedia. The series relies on retro-50s science, and as such, radiation can trigger stunning mutations, rather than killing outright.

A key product of nuclear fission and nuclear fusion, radiation has been one of the primary hazards in the pre-War world, due to the proliferation of nuclear energy as a compact, cheap source of energy. Ionizing radiation of various types was also used in a variety of medical, scientific, and military applications, and its widespread use led to the development of a variety of countermeasures to protect humans from harm, such as Rad-X or RadAway brand anti-radiation medicine. Another problem was loosening of corporate regulations as the Resource Wars grew in intensity, which led to an increase in illegal dumping in various sites across the United States as a way for corporations such as Mass Fusion to increase their bottom line at the expense of the environment and the society.[1][2][3]

The global thermonuclear war at the terminal end of the Sino-American War transformed ionizing radiation into a very commonplace risk in the wasteland. Radioactive contamination is the chief delayed effect of nuclear weapons, as it results in the creation of radioactive material with half-lives that range from days to millenia. This is due to the nature of nuclear fission used in the bulk of nuclear weapons during the Great War: When atoms fission they can split in some 40 different ways, producing a mix of about 80 different isotopes. These isotopes vary widely in stability; some are completely stable while others undergo radioactive decay with half-lifes of fractions of a second. The decaying isotopes may themselves form stable or unstable daughter isotopes. The mixture thus quickly becomes even more complex, some 300 different isotopes of 36 elements have been identified in fission products. Furthermore, a significant secondary source is neutron capture by non-radioactive isotopes both within the bomb and in the outside environment.[4]

Fission products initially have a very high level of radiation that declines quickly, as short-lived isotopes decay rapidly, emitting intense radiation, with only a fraction of the isotopes continuing to emit radiation over a longer period of time. However as the intensity of radiation drops, so does the rate of decline. A useful rule-of-thumb is the "rule of sevens". This rule states that for every seven-fold increase in time following a fission detonation (starting at or after 1 hour), the radiation intensity decreases by a factor of 10. Thus after 7 hours, the residual fission radioactivity declines 90%, to one-tenth its level of 1 hour. After 7*7 hours (49 hours, approx. 2 days), the level drops again by 90%. After 7*2 days (2 weeks) it drops a further 90%; and so on for 14 weeks. The rule is accurate to 25% for the first two weeks, and is accurate to a factor of two for the first six months. After 6 months, the rate of decline becomes much more rapid. The rule of sevens corresponds to an approximate t^-1.2 scaling relationship.[4]

The prevalence of radiation in the post-War world is due to fallout, deposited by nuclear explosions. Fission products and irradiated particulate are lifted into the atmosphere by the rising fireball, and whether they are deposited locally or globally depends on the strength of the explosion and its location. At yields of less than 100 kilotons (kT), the fireball does not reach above the troposphere and remains within precipitation regions. As such, nuclear fallout is usually deposited completely within months at the most. Explosions in the megaton range, however, cause the fireball to reach the stratosphere, and thus elevated fallout is carried globally and will continue to be deposited for months or even years. Although most of the short-lived isotopes will decay by then, such long-lived fallout would remain dangerous for a long time. Furthermore, the closer an explosion happens to the ground, the greater the amount of fallout generated. Nuclear weapons that explode close to the ground (groundbursts) will typically elevate a large amount of dirt and other debris into the atmosphere. As soil is not vaporized, but aerosolized by the explosion, this heavy particulate matter tends to deposit within minutes or days, with downwind contamination spreading it across hundreds or even thousands of kilometers depending on weather patterns. Furthermore, neutron radiation absorbed by the soil contributes a secondary source of radiation.[4]

Although the megaton class weapons have been largely retired by 2077, they were replaced with much smaller yield warheads. The yield of a modern strategic warhead was, with few exceptions, typically in the range of 200-750 kT. This reduction in yield results in a much larger proportion of the fallout being deposited in the lower atmosphere, and a much faster and more intense deposition of fallout than had been assumed previously. As such, the reduction in aggregate strategic arsenal yield that occurred when high yield weapons were retired in favor of more numerous lower yield weapons has actually increased the fallout risk.[4]

After the Great War, most of the radiation has decayed to a level that makes the wastelands habitable for the most part. Notable exceptions include heavily irradiated regions like The Glow and the Glowing Sea, where a combination of nuclear strikes, damage to nuclear facilities, and environmental factors caused the natural radioactive decay rate to be greatly reduced. Such secondary cascade radiation has proven to be especially dangerous at the former West Tek research facility, which was known to overwhelm and kill anyone without the proper precautions.[5] The entire region surrounding the Glow was contaminated, as discovered by a Hub trader who tried to explore the region in 2158, only to perish.[6]

A wide variety of tools have been created to monitor the presence and intensity of radiation fields. The Wattz Electronics C-Radz Geiger counter is one of the oldest and most reliable methods,[7] with Geiger counters included by default in later models of Pip-Boy personal information processors issued to Vault dwellers.[8] This functionality was intended for use outside Vaults, as the shielded facility effectively protected against radiation exposure beyond standard background levels.[9]

The standard unit of measurement is a rad, short for Radiation Absorbed Dose, equal to 0.01 Joules per kilogram.[10]

Main article: Mutations and their causes

Radiation is generally deleterious to living organisms. In humans, exposure to radiation almost invariably causes health complications, with their severity depending on the level of exposure. Symptoms include fatigue, nausea, vomiting, violent hemorrhages, loss of hair, teeth,[6] and skin, gastrointestinal bleeding, bloat, diarrhea, and ultimately, death.[11] Even if treated, radiation exposure can also lead to persistent mutations at a genetic level.[12][13][14] Of course, it can also lead to sterility.[15][16] The threat of radiation exposure is particularly severe among the less well-off members of society, especially in segregated societies like Vault City.[17]

For this reason, anti-radiation medicine has advanced greatly before the Great War, leading to the creation of drugs that can briefly increase a body's resistance to ionizing radiation (Rad-X) and remove it from the body by bonding with irradiated particles (RadAway).[18] Diagnostic equipment such as radscanners was also very common, to the point that even frontier towns like Junktown can count on the local doctor having one.[19] In more advanced societies, humans can count on automated medical treatment with AutoDocs and preventative inoculations that bolster their bodies' innate resistance to radiation.[20]

Some have actually weaponized radiation, to create traps and even handheld weapons. Children of the Atom are notorious for their use of radiation weapons, ranging from improvised pistols to automatic rifles and even grenades.[21]

The amount of radiation released during the Great War has led to major changes in the biosphere, on top of the devastating climate changes that followed in the wake of civilization's march to nuclear devastation. Its presence has induced widespread mutations in flora and fauna, leading to the emergence of giant versions of regular species. Radiation-induced mutation is behind many of the staples of post-War United States, such as radscorpions, geckos, spore plants, and brahmin.[22][23]

Some humans may also become mutated by radioactive exposure. Although most will die after exposure, a combination of factors can cause them to become ghouls, humans who resemble walking corpses, but cannot die - and in fact enjoy immunity to the deleterious effects of radiation. A majority of ghouls would be little more than shambling corpses, with a minority retaining their faculties. Even they, however, have a chance to become glowing one or growing feral due to the accumulation of radioactive poisoning.[24] Most mutated lifeforms are similarly immune to radiation, but may become "glowing" by accumulating exposure, with a distinct green glow accompanying them, together with a radioactive "cloak" that poisons their surroundings.[25]

Radiation has a varying effect in the games, ranging from being a marginal issue in Fallout and Fallout 2, due to the general lack of high radiation locations (with a number of exceptions) to a much more robust, involved feature in succeeding games. See below for details: