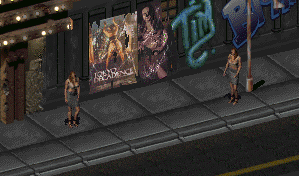 A pair of prostitutes outside the Desperado casino in New Reno (2241).

Prostitution refers to the practice of exchanging sex and related activities for various forms of compensation. Prevalent before the Great War, the practice has proliferated across the wasteland in the wake of the nuclear holocaust, as a result of social collapse.

Prostitution is a form of sex work, where parties trade sexual activity or activities for compensation, monetary or otherwise. It occurs in many ways and forms, including street prostitution, escort services, and brothels, and is performed by humans of all sexes and sexual orientations. As with all forms of economic activity, commercial sex is prone to exploitation, perhaps even more so to the general prejudice against prostitutes and their low socioeconomic status.[1] As such, prostitutes are routinely found working for bar owners and other procurers (pimps, typically male[2]), who secure lodgings, provide protection, and shield them from any local laws against the practice. In return, prostitutes pay them them with a percentage of their income.[3]

As the weaker side, prostitutes are frequently subjected to abuse in various forms. These can take many forms, including verbal abuse, being forced to take drugs to create a dependency,[4][5] physical violence, and in certain cases, even death at the hands of a wealthy client.[6] As such, exiting a life of prostitution can be difficult, especially with abusive procurers.[7][4]

Like other sex work, prostitution is frequently regulated in a variety of ways:

Prostitutes appear in almost every game in the series.

The following characters are forced into prostitution by various circumstances

Characters listed in this section appear in games that are not part of the main continuity, due to creative decisions or the game failing to release==