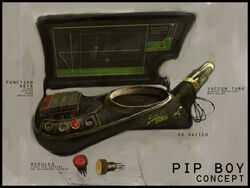 A tech demo of Van Buren, the cancelled Fallout 3 by Black Isle Studios, was created during the game's development. Several screenshots and one video of the tech demo have been released at No Mutants Allowed on April 30, 2007, followed by the tech demo itself on May 2.

The plot of the tech demo is not connected to the main storyline and was going to be included in the finished game as a tutorial. It takes place in the United States of America during the Great War, somewhere in the Great Midwest Commonwealth. The player character in the demo is referred to only as "Citizen" (even though he uses the Prisoner's model). His parents were reduced to ash, as they didn't believe the government's bombing raid sirens. He made his way to the relocation center and is escorted to a Vault by Corporal Armstrong of the 4th or 13th Armored Infantry Division. To reach the Vault, they must fight Communist insurgents. After he enters the Vault, the citizen must help turn on the life support system.

Read more...
About Van Buren
Van Buren was the project name Black Isle Studios assigned to their version of Fallout 3. In 2003, the game was canceled and the Black Isle employees were laid off.

The game would have taken place in the year 2253 in the American Southwest. The Prisoner, the player character, awakens in a prison cell. Suddenly the floor rocks violently from an explosion and the player is knocked unconscious. When they awaken, they find their cell door open and a hole in the wall leading outside. Leaving the prison, the character is under attack by some unknown assailant. Deciding that discretion is the better part of valor, the player flees into the night to explore this new world.

Read more...
Helping out
All pages can be edited and you are welcome to join us and contribute to this wiki. Everyone is free to create a new page or edit an existing one. If you have any questions about the wiki or helping out, you can ask one of The Vault's administrators. You may want to check out the help pages and policies and guidelines.
The Vault in other languages