Welcome
Welcome to The Vault
The Fallout wiki with 162,803 pages (33,347 articles) since February 7, 2005‎.
We are continuously building the finest guide to the Fallout series, and you can help!

Before the Great War, Seattle was a city in Washington State and then in the Northwest Commonwealth. One of its major landmarks is the Space Needle, which seems to have survived the War. Unlike the Core Region or the Capital Wasteland, Seattle is, at least in the winter, covered in snow.

Seattle appears in a piece of concept art for Project V13, where the Space Needle is clearly visible.

Among its developers were Chris Taylor, Mark O'Green and Jason Anderson, three of the creators of the original Fallout game.

Read more...
Fallout world
The Fallout world is not quite our own. It is an alternate reality which diverged from ours at some point after the second World War.

The base concept for the setting is the "World of Tomorrow" as imagined in the Golden Age of Science Fiction. This means that before the Great War, the Fallout world was more or less what the people of the 1940s and 1950s thought things would be like in 2077. 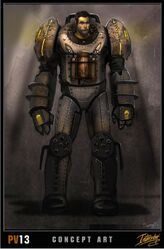 Concept art: "Badass Armor" by Serg.S
The Vault in other languages