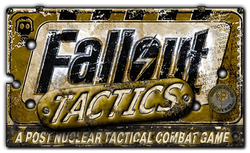 The Hellion is a powerful, heavily-armed aircraft, located in Buena Vista. It is a prototype weapon which was not finished before the Great War, so its completion is one of the objectives given to the Calculator after the activation of its pacification protocol.

It is unknown whether the Hellion is in a working condition, as Calculator may have already abandoned it for some reason, for example the lack of resourses to use it. With the destruction of nuclear reactor, the Calculator loses its chance to use the craft, and the Brotherhood surprisingly ignores its existence, likely due to the war with the robots.

Read more...
About Fallout Tactics
Fallout Tactics: Brotherhood of Steel, developed by Micro Forté and published by Interplay in 2001, was the first spin-off in the Fallout series. It focuses on squad-based combat and introduces near real-time combat, called "continuous turn-based" by the developers, as well as a multiplayer mode, to the Fallout series.

The game takes place in 2197 in the American Midwest. The Eastern Brotherhood of Steel is trying to claim territory surrounding Chicago. The Warrior, the player character, is a new recruit to the Brotherhood, tasked to lead a squad of soldiers made up of available initiates.