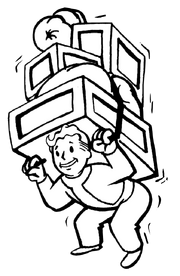 Over-encumbered is a condition in Fallout Tactics, Fallout 3, Fallout: New Vegas, and Fallout 4.

Your character's movement speed is slowed, and they cannot run. Additionally, it is possible to cripple the legs of your character, making them immobile.

After becoming over-encumbered, your character will not be able to run with this condition but can only do a slow walk. Sneaking is also difficult (and slower still than walking) as the inventory items create noise when moving. Fast travel also becomes impossible. In Fallout: New Vegas, this issue is expedited by the Long Haul perk.

When playing on Survival difficulty, becoming over-encumbered has several negative effect. In addition to Agility and Endurance being lowered by 2, characters will also periodically take damage as long as they remain over-encumbered.