Nuka-Cola vending machines are stationary elements of furniture designed to sell Nuka-Cola Corporation's beverages. They appear in almost every Fallout game to date, in one form or another.

The Nuka-Cola Corporation aggressively marketed their flagship product ever since its introduction in 2044. Low-maintenance vending machines were a crucial part of the strategy, and the corporation's generous investment eventually led to a vending machine on almost every street in the United States by 2067, available in a broad variety of types.[1][2]

A simple, free-standing vending machine. The coin-operated machine would deposit a bottle down the chute, and required periodic refills of coolant to keep the contents fresh. Old machines were prone to malfunctioning and instead of gently depositing the bottle could launch it violently at the buyer.[3] Of course, each bore advertising on its side promoting the cola.[4]

A large, imposing machine with a built-in monochrome monitor at the top for playing advertisements. The machine has been modified from the previous model to allow new bottles to slide into the trays, rather than being deposited mechanically and risking injury. As with the previous model, it's coin-operated with coin-changing functionality.[5] 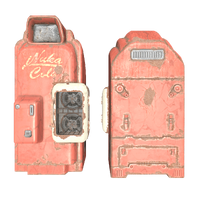 A towering evolution of the earlier vending machine model, this variant sacrificed inventory - capable of storing only a modest amount of bottles - for ease of access and appealing looks. Inserting a coin would unlock the cooler and allow the buyer to select the soda of their choice.