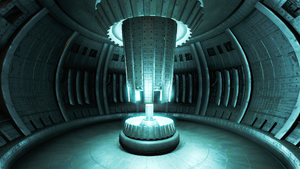 The interior of the Institute reactor, a tokamak fusion reactor.

Nuclear fusion is a reaction where two different atomic nuclei are combined to form one or more different nuclei and subatomic particles. The reaction can potentially release energy and be a more powerful and cleaner source of energy than nuclear fission.

Although the idea of harnessing power from a fusion energy has been proposed since the 1940s, the only "practical" use for these weapons has been the development of thermonuclear weapons, with yields several times greater than fission-based weapons. It wasn't until the 21st century and the energy crisis that the United States finally developed a practical way to harness nuclear fusion for energy generation. The first fusion cell was revealed in the Summer of 2066, as an offshoot of the US power armor project. The technology developed rapidly, becoming the cornerstone of many civilian and military technologies. Although the process of incorporating nuclear fusion into the general US infrastructure began in 2066, nuclear fusion proved to be difficult to scale to industrial-level power generation and by 2077 only a few sections of the United States relied on fusion power for base load generation.[1]

It's important to note that nuclear fusion relies on the capture of radioactive energy from microfusion reactions,[2] rather than generating power by using heat energy to drive turbines, as with nuclear fission.[3] The hot fusion reaction thus created is distinct from sustainable nuclear reactions achieved through electrochemical processes at or near room temperatures (so-called cold fusion), which are considered to be impossible to achieve.[4] This impossibility did not stop Vault-Tec from referring to the fusion generator at the core of the Garden of Eden Creation Kit as a cold fusion generator.[5]

The discovery of nuclear fusion has revolutionized life and industry in the United States, slowly supplanting nuclear fission as the premiere power source. Its uses were many and varied, including: