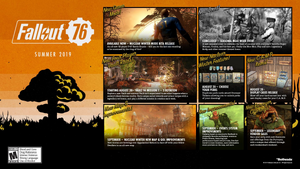 Nuclear Winter is the next content drop for Fallout 76, following the example of Wild Appalachia.

The first component added was the eponymous Nuclear Winter mode. The Battle Royale Sneak Peek began on June 10, 2019, and was to last until June 17th, until community excitement resulted in the mode being added permanently as a pre-beta mode.[1]