The Necropolis motel is the building in Necropolis.

This district is the first part of Necropolis encountered by the player and is a virtual shooting gallery, filled with many hostile ghouls. They are easy experience pickings for the distance shooter. The ghouls will become hostile easily if the player tries to converse and/or rifle through their storage. There are a few manholes scattered around the area, which lead to the city's sewers, connecting this district to the others. 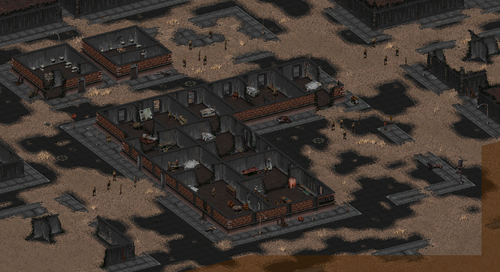 The hotel has a simple layout. There's little of note in the rooms, but there are manholes leading to the sewers beneath the hotel.

The sewers are a simple area. There's a small family of molerats in the south-east, a corridor filled with ghouls shot to death execution-style, and a passage to the Hall of the Dead in the northwest.

The Necropolis motel appears only in Fallout.