The mini nuke is an ammunition type found in Fallout 3, Fallout: New Vegas, Fallout 4, and Fallout 76.

Developed at Fort Strong as part of the M42 Fat Man project, the mini nuke is one of the most powerful conventional weapons ever devised. Though the project was plagued by design issues from the beginning, caused by the weight of the micro-nuclear warhead and the resulting low range, the designers eventually happened upon a break through: Instead of trying to reduce the weight of the warhead or the power of the launching system, one researcher proposed falling back on the spigot mortar system, used over 130 years before in PIAT launchers. The ingenious solution was just what was needed to complete the project and by September 2077 the first M42 Fat Man weapon systems were sent to ordnance depots across the United States.[1][2][3]

The mininuke consists of four principal components. The detonator shell on the bottom contains a conventional sub-charge that detonates when struck by the M42's striking pin, catapulting it out of the launcher. Four stabilizer fins attached to it ensure a stable trajectory and prevent tumbling in flight, increasing accuracy (a necessary feature, as the projectile is not spin-stabilized). The hemisphere core is screwed onto the top, containing the nuclear core. Finally, the weapon is fitted with a beryllium contact fuse that starts the nuclear reaction on impact.[4][5][6]

The baseline variant, providing a balance between firepower and range.

Stronger than mini nukes, but are exceedingly rare.

Similar to a regular mini nuke in affect but produces a larger explosion with an increased ballistic range and fallout radiation area.

Similar to a regular mini nuke in affect but produces a much smaller explosion with a shorter ballistic range.

Once fired, this type of mini nuke will detonate after 5 seconds rather than upon contact.

Loaded and fired like a standard mini nuke, but breaks upon launch into 9 smaller "tots" with each producing their own equally tinier explosion. Good for carpeting a wide area without the waste of several mini nukes. 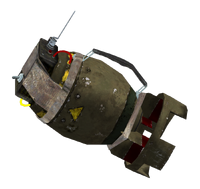 An improvised explosive device, created by bypassing the beryllium cap with a three-second delayed proximity fuze. Though crude, it is an incredibly effective explosive device.

As its name would imply, the mini-nuke grenade is all the power of a mini nuke, packed into a hand-held explosive device.