You look like you can handle yourself. Could you look for him and bring him back?

Part of a tiny enclave of Pitt Slaves that exists near the Market Square in the Downtown area, Milly is a close friend of Wild Bill and is desperate to know her friend’s whereabouts. She wanders the alleys, hoping to catch a glimpse of her friend. She has also appropriated some Stimpaks, hiding them in various nondescript objects throughout Downtown.[1]

Milly is, in fact, in love with Wild Bill, one of the more courageous slaves. She never actually grinds metal, she simply walks around the Downtown area, waiting for news from Wild Bill.

Milly appears only in the Fallout 3 add-on The Pitt. 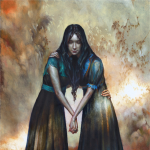