The Mercenaries' cave is a very small cave system between Broken Hills and Vault City which forms the base of operations for a group of raiders.

The raiders are actually hired by the Bishop family of New Reno with arms supplied by the New California Republic to lay pressure on Vault City to force them into becoming annexed by the NCR. Or so they hope to achieve...they're actually more like mercenaries, but in the eyes of Vault City, they are raiders, only more tactical: Never going through a line of fire, having officers, and laying suppression fire on important targets.

The cave is located almost halfway between the town of Broken Hills and Vault City. The cave is north-northwest of Broken hills, at a range of 3.75 grid squares. From Vault City, the cave is on a heading south-southwest: 7 grids south, one grid west.

Characters with a sufficiently high Outdoorsman and Perception stats can locate at least one of the two entrances to the cave without the benefit of a map. 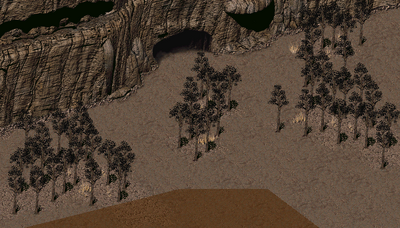 This entrance is only used if the player has found the location without using Bishop's map. 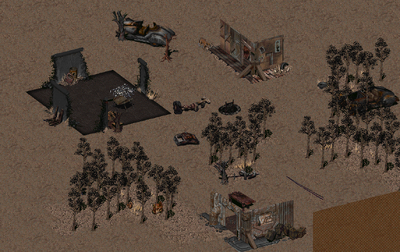 This location is used if the map was the source of information. 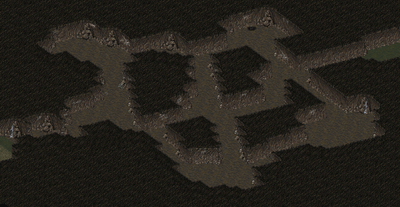 The main, natural entrance to the cave leads into an uninhabited section. This winding maze-like section of cave does not serve as home to any of the raiders, but multiple sinkholes can drop an unwary explorer into a level below - home to a small horde of small radscorpions. 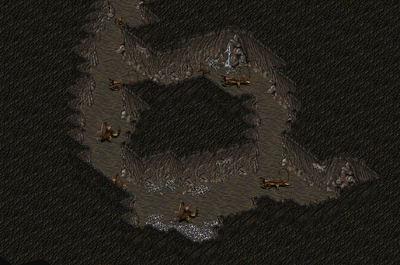 However, it is the farther reaches of the cave that are of interest to an explorer with a talent for combat. Accessible either from the entrance cave or from a manhole disguised by a small ruined building on the surface, the rear section of the cave is the base of operations for three raiders: Blondie, Tuco, and Angel-Eyes. The raiders' cave is, for the most part, typical of most raider strongholds found in the Fallout world. Weapons and ammunition are stored in modest quantities, along with a few valuable goods. What makes this particular cave noteworthy is its safe.

Used to store sensitive documents, the raiders' safe is both difficult to pick and booby-trapped with explosives. Only characters with relatively high Traps and Lockpick skills - as well as the appropriate tools for many characters - should attempt to open the safe. The safe can also be cracked if character has a high Luck. Inside is evidence of the Bishop family's involvement with the raiders and their attacks on Vault City.

Each of the three captains has a locker that contains their respective dog tags. Having all three in your inventory creates a new option in the dialogue box for the safe that lets you open it without picking the lock.