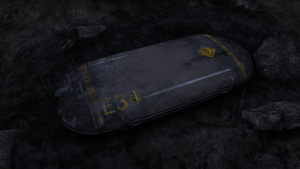 A supply container from the Kovac-Muldoon.
“

Those who came before you butchered our external connection hardware, scrambling the link between us and our closest and dearest system: ... the Kovac-Muldoon orbital platform. An ever-watching eye, trained on Appalachia.

The Kovac-Muldoon platform is a location indirectly encountered in Fallout 76.

The Kovac-Muldoon is an automated support satellite located in geosynchronous orbit above Appalachia, slaved to the Whitespring Congressional Bunker and its governing intelligence, MODUS. Launched in the terminal years of the United States, the Kovac-Muldoon was a mighty system providing the bunker's denizens with an eye on Appalachia, complete with the ability to launch orbital missile strikes at need. To minimize the threat of detection and destruction, the K-C was also equipped with the latest in anti-detection systems.[1]

However, as one of the first projects of this scale and ambition, it came burdened with a number of issues that did not manifest until the satellite was already in orbit. The most critical flaw was the system's reactor, which was burning through fuel at a rate far beyond what the designers expected. They surmised that the anti-detection systems were using extra juice due to the electromagnetic interference present at the platform's orbit. The expected lifespan of the Kovac-Muldoon was, therefore, cut down to just 50 years. Refueling projects were estimated to cost in the trillions, making them impossible to carry out. The Kovac-Muldoon was, therefore, left alone to fulfill its mission until it touched down, with project notes forwarded to other orbital development projects. While these teams - particularly the one responsible for the Bradley-Hercules nuclear launch platform - were not informed of what the K-C project was, they at least received enough data to avoid the mistakes that limited the K-C's usability.[1]

The Kovac-Muldoon served in its capacity after the war, primarily as an observation and support tool for the Enclave at the Whitespring Congressional Bunker. The automated promotion systems were hooked to the Kovac, providing a backup in case the standard military chain of command came apart.[2] Furthermore, it served as MODUS' eyes and ears above ground. For this reason, Gen. Santiago's rebels took out MODUS' landline connections to blind the AI and make it impossible for it to retaliate against them on President Eckhart's orders.[3] Problem is, when MODUS retaliated against the rebels, it also denied itself any chance to reconnect with the platform until, years later, the Vault 76 dwellers happened upon the Whitespring Bunker in search of a way to destroy the scorchbeasts. MODUS seized on the opportunity to restore its uplink and gain a semblance of a presence on the surface, using the K-C to direct orbital strikes against mutated fauna, run perimeter patrols, and provide reconnaissance and supply drops for the newly minted Enclave members.[4]

Kovac-Muldoon platform appears only in Fallout 76.