With its clowns, candy-themed buildings and gentler rides, Kiddie Kingdom was the ideal destination for Nuka-World's younger visitors and their parents.

Kiddie Kingdom is a park of Nuka-World.

One of the two original parks in Nuka-World, Kiddie Kingdom opened to the public along with Nuka-Town USA on May 1, 2050.[1] The park was an instant hit with the visiting children, and continued to grow and develop as the park expanded, centered around offering more fun than one could enjoy in just a single day.[2]

Magician Oswald the Outrageous was the headliner of the park, with tickets to his spectacular shows selling out for the day within a few hours of the parks opening each day.[3] Still, the Ferris Wheel was a timeless classic and visitors of all ages enjoyed relaxing and taking in all the sights Nuka-World had to offer.[4]

Unlike most survivalist settlements, Kiddie Kingdom was first conceived at party for Rachel Watkins who got a job in the park as Princess Cherry. Agreeing to take over the park if the Sino-American War turned especially sour, instead of sealing the deal with a handshake, the employees passed a round of shots. In less than a year,[5] Oswald and Rachel had adequately stocked up the employee tunnels beneath this park, including everything from preserved food and seeds, to tools, extra lumber and even water from the pump systems. It was just about everything, except for weapons, that was Mitchel's job. On October 23rd, 2077, the Chinese finally dropped the bombs, and all the employees stuck to The Plan. Unfortunately they were not able to talk sense into all of the park visitors, but they were able to grab a few out of the stampede and take refuge in the employee tunnels.[6]

One week later, with the survivors already having written him off as dead, Mitchel finally appeared in a semi-truck half full of guns, explosives, food, medicine, chemicals, and more; he reported he had simply been busy gathering the rest of what the employees would need to fortify Kiddie Kingdom. When Oswald asked him about it (and the blood on his shirt) Mitchel deflected and told Oswald to leave it alone. They then decided to blow up the service tunnel passages connecting to the other areas of the park as a precaution; additionally, if things did not calm down in the next few weeks, they would head outside and barricade the gates.[7]

The fighting outside indeed calmed down, so they decided to leave the employee tunnels and divided the Kingdom amongst themselves for living accommodation, and that it would be prudent to fortify the park regardless.[8] Just as they were finishing up barricading the gates, a strange storm started to blow in over the horizon to the east. They barely had time to finish, and when it hit, it hit hard. It was unlike anything they had seen before, almost like a tornado with green lightning arcing through the sky. They all ended up taking shelter where they could, but a few people just got sucked into the vortex and disappeared forever. The storm took hours to pass over, trapping those that took shelter where they were.[9]

The storm was highly radioactive, most likely picking up the fallout from Boston and everyone was experiencing radiation poisoning for weeks. Quite a few died and those who did not were mutating into ghouls, something their preparedness videos never mentioned.[9]

After the storm passed, the survivors finished setting up the defenses. Although the situation was bad, it was getting a little better. It was at this time Rachel (because of her background in organic chemistry) became their unofficial doctor, and Oswald stepped up and became the leader of the community.[5][10]

Within those first few weeks after the Great War they were attacked for the first time. The group that attacked was not particularity big, nor were they as well armed as those of Kiddie Kingdom. However, they were exceedingly desperate, and they fought ferociously. The attack ended with the survivors of Kiddie Kingdom being successful.[11]

Within the first few months since the radiation storms started twenty three people have died, and the rest had completed their mutation into ghouls.[12] One year after the Great War, in the middle of the night an alarm woke the refugees, the water intake pipes were taking in radioactive (and practically glowing) water from the outside. They had all heard the rumors about Nuka-World having some sort of reactor in the bottling plant and suspected it was for that new soda Nuka-Cola Quantum. Their assumptions were completely correct but at this point, it did not matter now that they all believed they were immune to radiation.[13][14]

Years later, they were attacked by a huge mob that managed to make it past the defenses and almost to the castle when Fran Fowler had an epiphany: the community was "immune" to radiation but the attackers probably were not. She ran into the tunnels and turned on the parks sprayers. In minutes, the attack was over. When her ex-boyfriend Evan heard it was her who figured it out, he kissed her until she couldn't see straight - needless to say they got back together.[15] This strategy continued for decades: groups continued to investigate the park from time to time but they were mostly scared off by the ghouls and their clown makeup, or the radioactive misters.[16]

However, over a hundred years passed before something they began calling "The Affliction" started sweeping through their people; the radiation had taken its toll and began to turn them feral, developing an insatiable hunger for flesh and become excessively aggressive.[17][18] It eventually got worse and worse and the community looked to Rachel to figure out some way of healing them, Despite trying every remedy she knew of, she was unable to treat it. At this point they knew what it was and when it was coming. Some were naturally afraid they were all going to end up as feral beasts, having to be locked away to prevent them from mindlessly attacking people. Part of the community even suggested putting the afflicted out of their misery, but the notion was rejected almost immediately. This community had become a family; family does not kill family, they find find a cure... even if the chances look grim.[19] Even after they had survived radiation storms, starvation, and attacks for over a hundred years, it would be feralization that ultimately ended their settlement.[20]

Rachel's childhood friend Fran would also eventually succumb to "the affliction", leaving Rachel distraught and hating their home.[21] However, the affliction soon proved its worth; after Fran had succumbed to it, there was a huge attack on the park that pushed the community all the way back to the castle gate; when they were about to retreat into the theater, feral ghouls climbed out of the woodwork and pushed the invaders back.[22]

This raid also prompted to Oswald (now a glowing one) to practice some of his new found "magical" talents. Dean Becker had been shot by a stray bullet and fearing the loss of another one of them, Oswald snapped, sending out a wave of energy that cause Dean to start breathing again; his mutation had allowed him to heal his comrades, which opened the door for the potential of using it to cure the affliction.[22][23]

Search for a cure

However, in 2286, a new gang of raiders led by Colter, larger than any other group the community had seen thus far, seized Nuka-Town USA.[24] It was also around this time that Rachel suggested that either she or Oswald break from the group in order to search for a cure for the Affliction elsewhere; Oswald was hesitant at first, unsure as to whether or not the community could survive with half the amount of leadership, but even his powers were unable to cure it. Shortly after the discussion, she left for the ruins of Bradberton, hoping to find leads to follow[25][26]

Over a year went by without word from Rachel; prospects looked increasingly worse for Kiddie Kingdom, with the castle walls crumbling and no one left in the park beside Oswald and his afflicted comrades.[27] Ignorant that the affliction had taken over Rachel as well, no sooner than when she finally reach Bradberton,[28] Oswald continued looking over the park like he had for centuries before, keeping scavengers and raiders out with a dense radioactive fog and shambling, painted Afflicted.[29] 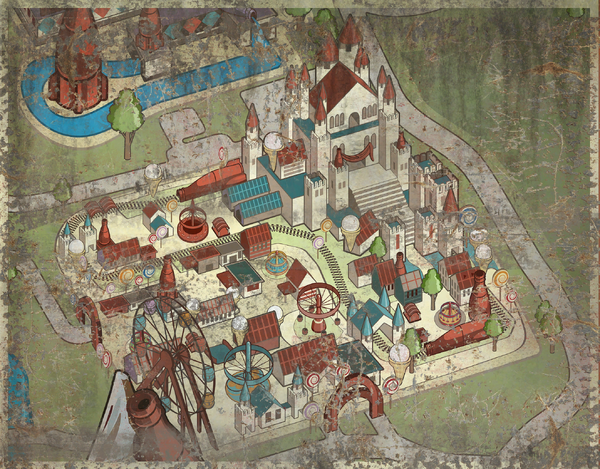 Kiddie Kingdom is fairly confined and maze-like, not helped by the fact that Oswald turned it into a gauntlet for anyone foolish enough to enter. The entire area is covered in a radioactive haze, courtesy of the radioactive misters and can get up 37 rads per second right next to the misters. The best course of action is to run from landmark to landmark, starting with the Ferris wheel and to not tarry too long in any one place, as the radiation stacks rather quickly. Stay as far away from the misters to minimize their effect.

The first arena's exit is north of the Ferris wheel; an exit to Nuka-World is to the west while the second arena lies in the east. This arena surrounds the ice cream parlor at the center of the Kiddie Kingdom (the doorway has a turret above, alternatively, you can enter through the bakery shop). The area connects to the Fun House and is circled by the Nuka-Racers. South of the Nuka-Racers, flanking a rotating Nuka-Cola bottle ride, are doors to the employee tunnels; they can also be accessed by following the Nuka-Racers track through a tunnel in the castle to an alcove with the door.

King Cola's Castle and the tower by it, with the Cappy clue, lies in the eastern side of the Kingdom, and can be accessed from the central arena with the roundabout, or by jumping up the cliffs from the Fun House. The upper terrace connects directly to King Cola's Castle.