The Jungle Gym has produced many - if not all - of the post-nuclear wasteland's prizefighters, including the (in)famous Mike "The Masticator".

Despite the anarchy of New Reno itself, the New Reno boxing establishment does have rules. More than that, it has standards. A prospective boxer must match up to certain physical expectations - as held by the resident boxing coach: a red-haired midget named Stuart Little - to be considered, or it's back outside.

If Stuart decides to take a chance on a fighter, they choose a name, are stripped of their inventory (for the duration of the fight only), are handed a pair of regulation boxing gloves, and tossed into the ring with a "training wheels" fighter. The boxing scene in New Reno is tight, and a single failure can doom a career. Even so, with only one agent around, Stuart generally dictates his cut of any earnings.

There's generally only two rules in New Reno boxing: everything must hit above the waist, and no kicking. A called shot to the groin or legs will end the bout with a loss for the player, and a kick to any body part will do the same.

Traditional forms of "cheating," such as using boxing gloves with metal inserts, would probably be considered in violation of the ersatz rules of wasteland boxing, were there a boxing commission to investigate the matter. As a result, a few pairs of plated boxing gloves float around New Reno.

The Breaks and Breaking

The life of a potential prizefighter is fraught with peril, the least of which is losing. The New Reno boxing establishment is not very forgiving, and many a new boxer has found no pity in Stuart Little's eyes after losing an early bout. Towards the higher ends of competition, injury is a distinct possibility, up to and including the removal of certain extremities - namely, the ears - thanks to the overeager antics of the current New Reno boxing golden boy, Mike "The Masticator."

Additionally, since entering each fight grants a bonus to damage resistance, an enterprising boxer might throw several fights intentionally to replay them and increase this bonus. 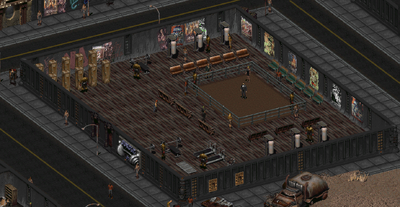 Just south of the Shark Club casino (home of the Bishops) and across Second Street from the Golden Globes studio, the Jungle can provide a brief career opportunity for someone with strength, guts, and a malfunctioning survival instinct.

Much of the Jungle Gym is, predictably, given over to weight training and boxing drills. Many fighters spend their days in the Jungle, training and hoping to one day make the big time. The prospective boxers are evaluated, and many are passed over.