Hervé Caen is a French entrepreneur who founded Titus Interactive with his brother Eric in 1985. Titus acquired Interplay in 1999, and Hervé Caen became the CEO of Interplay, which he still is as of 2013.

History of Interplay under Caen

In 2001 Brian Fargo, the CEO and original founder of Interplay, resigned, citing creative differences with Titus, and Herve Caen became CEO of Interplay. The Van Buren project was postponed by Caen in favour of Fallout: Brotherhood of Steel, and then canceled to start pre-production of Fallout: Brotherhood of Steel 2. FO:BOS 2 was never released, as Interplay ran into severe financial problems.

During this time, the employees did not receive their salaries, medical insurance, worker's compensation, and other benefits for many months. The state of California filed charges against the company for multiple labor violations, forcing the company to cease operations until the problems were corrected. A $79,000 fine was levied against Interplay, in addition to $179,000 that they owed California in unpaid taxes. Eventually, the company was closed when the owner of their corporate headquarters evicted Interplay for not paying their rent, reportedly totaling $432,000. 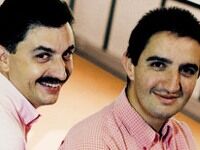 Herve Caen and his brother, Eric

On November 30, 2006, Interplay, still headed by Hervé Caen, filed a Form 8-K filing to the United States Securities and Exchange Commission (SEC) regarding a potential Fallout massively multiplayer online game.[1] The Form 8-K contained a prospectus stating that Interplay will be issuing common stock on Euronext to raise capital for developing a Fallout MMOG. The report stated that the production and launch processes will require an estimated US$75 million in capital. The report also stated that production may start as early as January 2007 and the game may launch as early as July 2010.[2]

Specific requirements were stated in the agreement that if not met, Interplay would immediately lose and forfeit its license rights for Fallout. Development must begin within 24 months of the date of the agreement (April 4, 2007), and Interplay must secure $30 million within that time frame or forfeit its rights to license. Interplay must furthermore launch the MMOG within 4 years of the beginning of development, and pay Bethesda 12 percent of sales and subscription fees for the use of the IP. Neither the filing nor the exhibit specifies just how Interplay will start development within 24 months of April 2007 or how it will be able to acquire the minimum financing requirement of US$30,000,000.00 seeing that Interplay still is in dire financial straits.

In November 2007, Interplay reopened in-house development and hired Fallout developer Jason D. Anderson as creative director for an unannounced MMO.[4] Given the aforementioned facts, it's most likely that the game Anderson was working on is Interplay's Fallout MMO, given that he was the contact name of Interplay's jobs appliance and that Fallout was referred in the job requirements.[5] In March 2009, Anderson left Interplay and joined InXile Entertainment.

On June 30, 2008, it was announced that Interactive Game Group, LLC (created by Frederic Chesnais, former Chief Executive Officer of Atari, which now also owns MicroProse) purchased 2,000,000 shares of Interplay stock, as consideration for entering into a game production agreement. On April 2, 2009 Interplay announced a binding letter of intent with Masthead Studios, a Bulgarian-based developer, to fund the development of Project V13. Masthead and Interplay teams will work together under the direction and control of Interplay to complete development of the project.[6][7]

On April 15, 2009, it was announced that Bethesda Softworks moved to rescind the Fallout MMORPG license.[8] On September 8, 2009, Bethesda filed two lawsuits, accusing Interplay of two counts of breach of contract, trademark infringement and unfair competition. In the first lawsuit, Bethesda claims that Interplay is in breach of the Fallout MMO agreement for failure to commence full scale development by April 4, 2009 and to secure certain funding for the game. Interplay disputes these claims.

The second lawsuit concerns Interplay's continued sale of Fallout, Fallout 2 and Fallout Tactics. According to Bethesda, the licensing contract requires all advertising, packaging and other promotional material to be sent to them for approval first, which, according to the lawsuit, was never done by Interplay regarding neither the Fallout Trilogy pack, nor any of the releases through Good Old Games, Steam and other digital distribution platforms. Bethesda also claims that the name Trilogy constitutes unfair competition, since it suggests that the pack includes Bethesda's own Fallout 3.[9]