Golgotha is the graveyard outside of New Reno, where people are sent to be killed, and/or killed people are buried, when they fall out with one of the mob families in New Reno.

Graves lie to all four sides of a paved crossroads, and staked bodies rot in the sun. A sign points northwest to New Reno and down, conveniently indicating the direction of Hell.

Golgotha can not be naturally revealed on the map, and there are only 3 way to get it's location: 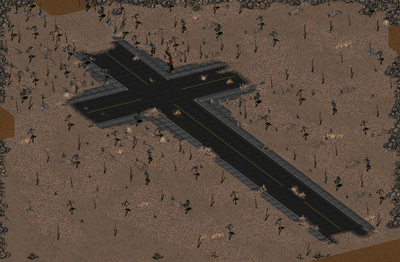 Golgotha appears only in Fallout 2 but it's mentioned by Stella in the Fallout: New Vegas add-on Honest Hearts.[1]