Giddyup Buttercup is the name of a robotic toy horse manufactured by Wilson Atomatoys before the Great War of 2077.

"Ah, the Giddyup Buttercup. Bringing those dreams of owning a pony to life... and with very little maintenance I might add." 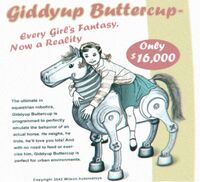 Once touted as the "ultimate in equestrian robotics", it was a toy aimed at a target audience of little girls with a cost of $16,000 (c.2042). They brought the dreams of owning a pony to life, and with very little maintenance.[1] Perfect for more urban and suburban environments.[2]

A marketing poster featuring the horse is copyrighted 2042.[2] This mechanical horses would remain a top market seller well into 2277, and their brand recognition would still be, mostly, intact in 2287.[3][4] The item itself would become a rare and valuable find, more so for undamaged relics.[5][6][7]

In the Mothership Zeta add-on, the aliens are shown to have an unusual fascination with the toy, possessing hundreds of them stacked on racks in the Research Lab. One particular observation room has a lone Buttercup in the center surrounded by five dead Test Subjects. Blood stains on the glass tube in the center and the floor suggest that the group was attempting to flee something in vain, ostensibly the seemingly harmless toy. Alien Captive Recorded Log 21 features Sally being taken to the recording room and noticing a Giddyup Buttercup. The aliens are described as being excited, either by her recognition of it, or by her happy reaction. If Paulson, Elliot Tercorien, or Somah are taken to the Buttercups in the Research Lab, they will make several uneasy comments about them.

Although Giddyup Buttercup is mentioned only in Fallout 3, Fallout: New Vegas and its add-on Lonesome Road; it appears as a world object in the Fallout 3 add-on Mothership Zeta and a miscellaneous item in Fallout 4.