I'd sooner ask myself what makes me an undying son of a bitch than spend any thought as to why they crawled to life here.

Ghost people are creatures found in the Sierra Madre in 2281.

Ghost people are mutated humans changed forever by The Cloud, a combination of corrosive rust-like toxins unique to the Sierra Madre. A green vapor that seems to be a byproduct of The Cloud escapes and is reabsorbed continuously from their hazmat suits by means of aeration on their thighs, elbows and face mask, indicating that their mutation originates from permanent exposure to The Cloud. They are the only ones able to walk in and out of the Cloud unharmed.

The ghost people originate from construction workers that worked on the Sierra Madre Villa before the War. During construction, a strange gas that would evolve into the Cloud began leaking from the pipes and hospitalized a worker with severe lung and tissue damage; further progress was called off until protective gear could be issued.[1] Hazmat suits designed specially in Big MT arrived to protect against the noxious gas. Incidentally, the gas leak itself was also created at Big MT, and the hazmat suits being an "experiment within an experiment."[2] The hazmat suits were bulky, nearly impossible to speak through, and grew stiff with use. Most importantly, the locking mechanisms would quickly corrode when in contact with the Cloud, to the point where the hazmat suit had to be cut open with a cosmic knife, yet the suits still didn't provide proper protection from the poisonous gas cloud.[3][4]

Ghost people are similar to feral ghouls in several aspects. Dismembering them reveals bright, glowing blood, akin to that of a glowing one and they also shriek before attacking. However, they seem to be a different mutated evolution and not simply a feral ghoul or glowing one in appearance, as their ability to use and construct weapons is still intact. Virtual immortality and death only with limb amputation is also a mutation very specific to them.

The moniker "ghost people" can also be ascribed to the ghostly manner in which they inhabit the ruins; their manner, movements, and general presence are seemingly much akin to a malignant haunting to any who have survived and fled attempts to breach the Sierra Madre. Dean Domino questions whether being "alive" applies to the ghost people,[5] and claims there are hordes and hordes of ghost people living under the Sierra Madre's streets, comparing it to a hornet's nest.[6] It is not clear why the ghost people drag their victims off into The Cloud. Whether to consume, torture, or convert them into something like themselves nobody knows, or has survived to tell the tale.[7]

Ghost people are mysterious creatures; they do not speak, and they seemingly never sleep. They seemingly exist only to lurk through the villa ruins, forever seeking prey, whether mortal or holographic. If they have a lair at all, it is unclear where: according to Dean Domino, they collect anywhere in the Sierra Madre away from holograms;[8] the underground service routes and ruined buildings of the Sierra Madre Villa are prime habitats for them.[9] Their most common hunting grounds are Salida and Puesta del Sol, especially in areas thick with the Cloud.[10]

The centuries-old stiffening hazmat suits and Cloud-related malady force them to shamble like undead creatures. Despite this, they are in fact quite agile when necessary, often lunging and dashing with surprising speed. The ghost people are incredibly territorial (and equally hostile) and oust any intruder in the Sierra Madre. Their primitive minds still form some semblance of group tactics; they hunt their prey similarly to a pack of wolves. They band together in groups of two to three and hide in the refuges of shadow and Cloud, striking relentlessly when prey wanders too close.

Ghost people enjoy apparent immortality, but possess a unique mutation whereby they only die if one of their limbs is amputated.[11] This suggests a universal mutation in which everything is connected to each other, not just the brain with the other organs, causing direct death if a member is removed. (it is possible that they die due to the explosive decompression that occurs when the hazmat suit is torn in such a way.) Blood and yellow fluid spray at high pressures when they are injured, which Dog explains as them having pockets of pressurized gas inside them.[12]

These abominations are always hostile to the player. They are difficult to pin down, as they will constantly lurch and jump around during engagements. They do not utilize firearms, using only primitive weapons made from resources found in the Sierra Madre villa. Often encountered in group of two to three, ghost people use group tactics when confronting prey. Ghost harvesters stay back and throw knife spears until exhausted, then close in with the hulking trapper to overwhelm the prey. All the while, the seeker is setting traps nearby to either route or damage the prey.

Ghost people possess many attributes that prove to be daunting in combat: they do not take any extra damage from head shots, their hazmat suits protect them completely from residual fire damage and cannot be killed permanently by normal means. In order to be killed, they must be either disintegrated, dismembered or devoured by Dog, or they will simply get up and continue attacking, albeit with less health. The revival of the ghost people is most likely due to their exposure to the Cloud. It is indicated by characteristic gurgling, so it is recommended that the player either stand back or quickly destroy one of their limbs before they can return to the battle. In addition, when the limb of a ghost person is crippled it will automatically be amputated thus instantly killing the ghost person. Although, these traits are balanced by the ghost people's total lack of conventional armor.

Often the only warning the player has of their presence is a strangled choking or muttering sound. Paradoxically, ghost people have a Perception of 0, so they should be incredibly easy to sneak past. However, an error in the game engine causes a Perception of 0 to produce an infinite Perception, meaning ghost people will always see you. 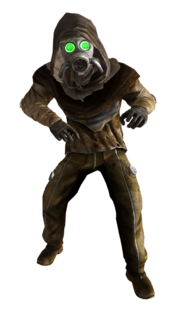 They are not the most durable or proficient opponent in close combat, but their throwing knife spears can cause great damage in a short time. Also, they usually jump to the right or left after throwing a spear, which makes them hard to target with a weapon. During one section of Fires in the Sky, ghost harvester corpses will contain ghost harvester remains for Dog to eat.

Ghost seekers are the least common variant of ghost people. They are taller than ghost harvesters but slimmer than ghost trappers and usually wear a hood. They are equipped with knife spears and gas bombs, throwing one or occasionally two gas bombs and then closing to attack with a knife spear.

While they do not withstand as much damage as ghost trappers, ghost seekers are extremely capable in melee combat. It should be noted that low level players should watch out for ghost seekers, as the gas bombs can cripple limbs. 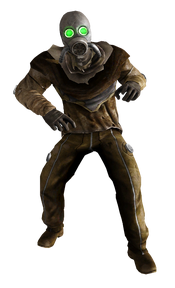 Ghost trappers can be identified by their large size and lack of hoods. They are only equipped with bear trap fists, but are deadly in close quarters fights with them. Ghost trappers are also responsible for the inordinate amount of bear traps and tripwires in the Sierra Madre.

They are capable and tough unarmed fighters, therefore they are best picked off from a distance. However, ghost trappers are often found in groups with knife spear-bearing harvesters or seekers.