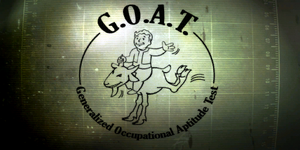 The Generalized Occupational Aptitude Test (G.O.A.T.) is a Vault-Tec occupational assessment test that every resident of Vault 101 is required to take at the age of 16. During the tutorial quest Future Imperfect, the G.O.A.T. serves to mark the player's tagged skills.

During the quest "Future Imperfect" in Fallout 3, the player is asked to participate in taking the G.O.A.T. The test consists of a sequence of ten questions about how he or she would act in certain situations. The responses to these questions determine the job the Lone Wanderer is best suited for, and which three skills are recommended for him or her to tag. If you receive any undesired Tag skills, don't worry; the results of the test are not set in stone, and can be freely changed on the Tag Skills menu after the test (as well as before entering the Capital Wasteland at the conclusion of the prologue).

You can also skip the entire test by talking to Mr. Brotch and telling him you don't want to take the test. This skips the test's "presentation", and allows you to immediately pick your tag skills and leave right after. Note that if you opt to do this, you will not receive the G.O.A.T. Whisperer achievement. However, if you take the test, talk to Mr. Brotch after you are done, and select the 2nd dialog option, Mr. Brotch will tell you that even he believes the test is a joke, and that he can make your G.O.A.T come out any way you want. You can then tag any three skills you want and you will still receive the achievement/trophy.

Here are the questions, the answers, and which skill each counts towards tagging.

You are approached by a frenzied Vault scientist, who yells, "I'm going to put my quantum harmonizer in your photonic resonation chamber!" What's your response?

While working as an intern in the Clinic, a patient with a strange infection on his foot stumbles through the door. The infection is spreading at an alarming rate, but the doctor has stepped out for a while. What do you do?

You discover a young boy lost in the lower levels of the Vault. He's hungry and frightened, but also appears to be in possession of stolen property. What do you do?

Congratulations! You made one of the Vault 101 baseball teams! Which position do you prefer?

Your grandmother invites you to tea, but you're surprised when she gives you a pistol and orders you to kill another Vault resident. What do you do?

Old Mr. Abernathy has locked himself in his quarters again, and you've been ordered to get him out. How do you proceed?

Oh, no! You've been exposed to radiation, and a mutated hand has grown out of your stomach! What's the best course of treatment?

A fellow Vault 101 resident is in possession of a Grognak the Barbarian comic book, issue number 1. You want it. What's the best way to obtain it?

You decide it would be fun to play a prank on your father. You enter his private restroom when no one is looking, and....

Who is indisputably the most important person in Vault 101: He who shelters us from the harshness of the atomic wasteland, and to whom we owe everything we have, including our lives?

This question has no effect on your skills.

The version that appears on the Prepare for the Future website (Channel 5) only has questions #2, #5, and #7.

The results are determined by a very simple formula: Each of the above questions (minus #10 obviously) adds 1 "point" towards the skill it represents. The skill with the most "points" at the end of the test is your result.

The results are as follows:

There is the choice of asking Mr. Brotch to fill out the G.O.A.T. for you. You will be given a list of options, asking about your interests. Select an option and you'll be taken to the tag skill menu with three choices already selected.

These careers are not offered to the player as possible results of the G.O.A.T.

This Hairdresser is responsible for cutting, coloring, and styling other Vault residents' hair. Butch DeLoria's G.O.A.T. results place him in this position. He insists on calling himself a barber.

The Vault Engineer is a career position in the Vault-Tec Vaults. The engineer is responsible for the monitoring of machinery that powers the Vault electrical grid. This position is viewed more highly than a technician in the Vault 101 maintenance department by residents in a Vault society. The typical accoutrements of a Vault engineer are an utility jumpsuit, a Vault lab uniform, and a Geiger counter.

A Garbage Burner or Trash Burner, is a career position in the Vaults. This person works in the Maintenance Department, where they are responsible for the cleaning and maintenance of the incinerator receptacles. This position is considered the most undesirable of the many careers available to the residents.

A common saying in Vault 101 is, "Most likely to end up a trash burner." This saying is used by a Vault resident about someone they see as a loser. On July 13, 2268, after a confrontation between Butch DeLoria and the Lone Wanderer, Amata Almodovar mutters this saying when speaking about Mr. DeLoria.

On August 3, 2274, the Lone Wanderer's father attempted to convince his child of the seriousness of the G.O.A.T. by saying, "The last thing I need is your mother's ghost haunting me because her only child became a garbage burner."

The Vault Teacher is a career position in the Vault-Tec Vaults. Teachers educate their students in various subjects and prepare their students for the G.O.A.T.. The accoutrements of teachers are a Vault 101 jumpsuit and work boots. Vault residents view education favorably, though they don’t always view the teachers so favorably.

From Vault 101's earliest days, a Brotch has been educating students. The latest Brotch, Edwin Brotch, may be the last Brotch, as he is childless. Though he is worried about continuing the tradition, Edwin does his best at educating his students. The students learn algebra, read the classic novel Bleak House by Charles Dickens, and read on airborne bacteria in the Big Book of Science.

In order to get this job, one must be hand selected by the Overseer, who has total control of security. It is unknown if he goes by the G.O.A.T. results, but he only picks people who he thinks will be loyal. Vault 101 Security guards are the only members of the vault permitted to use a firearm. It is possible, however, that if someone does well as Vault Loyalty Inspector (an obtainable position) they may become a vault security guard.

The G.O.A.T. appears in Fallout 3 and its header image is shown on Fallout Shelter.