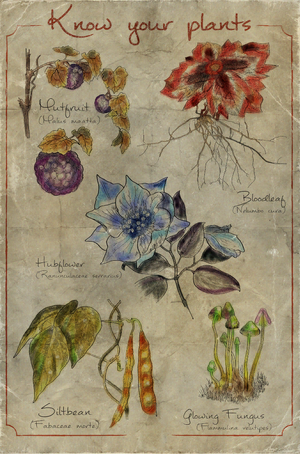 A Responders' poster showing the different kinds of Appalachian plants.

Flora refers to the various types of plants found throughout the Fallout series.

[It's one of those things where the most implausible part of the setting is the fact that everybody's deciding to use the blasted, infertile wasteland of the desert as the place to rebuild society. You'd think the areas that aren't a horrible desert where people have to struggle just to get water would be the centers around which people would rebuild society.] Paiutes lived there before Europeans ever arrived and were able to survive. Many of the crops in F:NV were taken from this book: https://www.amazon.com/Growing-Food-High-Desert-Country/dp/0865340668 The fact that the Mojave wasn't irradiated and had relatively easy access to water via Lake Mead and the Colorado River made it better than many other areas in the American SW.