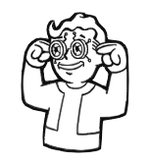 Hello and welcome to the first of The Vault's articles on Fallout. We have retired out old Wikilog system in favor of the official Twitter accounts for the series providing a live feed of current events. Articles are the second component of this system, trading frequent updates for higher value content, as with our coverage of Fallout 4's announcement.

This article is devoted to a commonly raised issue: Just how large is Far Harbor?

Before we delve into the meat of this article, let us point out a few facts:

Fallout 4 world map files with the correct region borders are provided by FloorBelow. Thank you!

Fallout 4 and other Fallout games

Fallout 4 DLC and other Fallout DLCs

All map images and cell data for The Elder Scrolls games provided by The Unofficial Elder Scroll Pages.

All raw images used in this comparison.