In Fallout 4 proper, there are two references to the motion picture Aliens;

However there is another one in the Fallout 4 Vault Dweller's Survival Guide p.215;

You see a pack of frothing ferals. You’d better get back because it’ll be dark soon, and they mostly come at night. Mostly.

This is an almost direct quote from Newt to the space Marines.

There are several allusions to the American Revolutionary War, such as;

The Nahant Sheriff's Department was run by a Sheriff Taylor, this is an allusion to Andy Griffith whom played the Sheriff of Mayberry, North Carolina on The Andy Griffith Show.

Back to the Future

There are several references Back to the Future in the names that Codsworth can refer to the Sole Survivor.

The random encounter of the young girl Kat and her sentry bot traveling partner Gus appears to be a reference to the BioShock series' Little Sisters and their protectors, the Big Daddies.

There are several references to the motion picture Blade Runner.

A Boy and His Dog

The canine companion's name met at the Red Rocket truck stop is later reveled to be Dogmeat. This is a reoccurring theme throughout the Fallout series to name the dog companion after the insult Vic exclaims to Blood in the motion picture A Boy and His Dog.

The Cask of Amontillado

General McGann's corpse in The Castle tunnels, is lying next to a crate of wine containing "Amontillado" wine bottles. Opposite him is a skeleton chained behind a half-built brick wall, with a illegible placard. This is a references to Edgar Allan Poe's famous story The Cask of Amontillado. An apocryphal legend holds that the inspiration for The Cask of Amontillado came from a story Poe had heard at Castle Island (South Boston), Massachusetts, when he was a private there in 1827.[2]

In addition the Amontillado bottle itself is branded with the name "Montressor". Montressor was the antagonist and the narrator of the story. Furthermore, it was "Bottled by P. Edgar" (in smaller print on the bottom of the label) is another reference to Edgar Allen Poe.

Captain Planet and the Planeteers 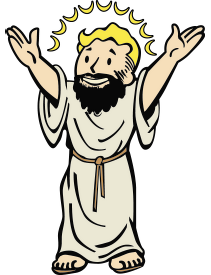 The image and title of the perk Lifegiver is a Vault Boy presented in a manner consistent with representations of Jesus Christ.

In the southwest of Bradberton there is a ruin of a small house with a Chinese officer sword sticking into a mound of ash in the living room. Behind these ashes is an alter with symbols for the sun and stars. Kindling a fire from the glowing embers produces three stimpaks, and taking the sword produces three more. This is a direct reference to the Dark Souls series, wherein bonfires are used to refill the health of the player character.

Dr. Strangelove or: How I Learned to Stop Worrying and Love the Bomb

The nuclear command room scene in the Fallout 4 intro is a direct allusion to Dr. Strangelove or: How I Learned to Stop Worrying and Love the Bomb.

If set to guard mode Professor Goodfeels will continually repeat the Daleks' famous refrain "Exterminate."[4] from the television series Doctor Who.

There are several references to the The Elder Scrolls throughout Fallout 4.

With the addition of the Wasteland Workshop downloadable content Vault dwellers will repeat lines from Fallout Shelter.[6]

Several paintings found throughout the game feature the likeness of Bethesda Softworks employees.

A Gunner combat line "Get some!" alludes to the famous chopper scene in Full Metal Jacket.

Nicole Connelly, the suspect of a grand theft auto prior to the Great War, is referred to as "NiCo" in the official log entry of the Boston Police Department.[7] "NiCo" is a reference to the protagonist Niko Bellic in the video game Grand Theft Auto IV.

At the western entrance of the Commonwealth Institute of Technology is a reference to the motion picture Good Will Hunting. Specifically the scene where Matt Damon's character, Will Hunting – is an unrecognized genius who, as part of a deferred prosecution agreement after assaulting a police officer, becomes a client of a therapist and studies advanced mathematics with a renowned professor – solves the mathematics challenge – "homeomorphic irreducible trees of n=10" – put forth by Professor Gerald Lambeau (Stellan Skarsgård). On the chalkboard is two of these probables and they are solved by the janitor, whose skeletal remains are next to the mop, metal bucket and chalk. Furthermore Good Will Hunting takes place at the Massachusetts Institute of Technology.

The General Atomics International employee Isaac and the three high-priority command routines he was forced to program into the Handy Eats robots' personality archetypes are a cultural reference to Isaac Asimov's I, Robot and its Three Laws of Robotics.

Indiana Jones and the Kingdom of the Crystal Skull

The very beginning of the quest Kid in a Fridge is a reference to Indiana Jones and the Kingdom of the Crystal Skull. In which Indiana Jones survives a nuclear blast by hiding in a lead-lined refrigerator, similar to Billy Peabody.

In boats all around the Commonwealth there is the skeleton of a man with the remains of a tattered blue jacket and a blue bandana, alongside a machete and the corpse of a dolphin whale. Also underneath the boats is a cage. This is a clear allusion to the motion picture Jaws; specifically when Robert Shaw's character Quint is devoured by the shark.

The lone red seat in the right field bleachers of Diamond City is an allusion to the home run, hit by Ted Williams on June 9, 1946, was officially measured at 502 feet. The lone red seat (Section 42, Row 37, Seat 21) signifies the longest home run ever hit at Fenway.

There are several references Mad Max in the names that Codsworth can refer to the Sole Survivor.

A loading screen depicting a Memory lounger has the caption "Free your mind" at the bottom.[8] This is in reference to Morpheus' quote in the Matrix.

The depiction of Shaun in the PIP-Boy quest image for Nuclear Family bears a striking similarity to Dr. Thomas Light of from the Mega Man video game series.

The video game Atomic Command is an allusion to Missile Command.

Monkey Shines: An Experiment in Fear

The monkey toy used as a motion sensor of sorts for traps throughout the game is a reference to Ella. The trained monkey that murders people in the motion picture Monkey Shines: An Experiment in Fear.

Monty Python and the Holy Grail

When getting hit in combat Codsworth quotes[9] the Black Knight from the motion picture Monty Python and the Holy Grail. As neither feel the pain of being hurt.

The main and backbone of the characters of NCIS, Leroy Jethro Gibbs, is referenced on regional BADTFL Sergeant Dave Mallory's terminal. In the entry he laments – among other things – how he has to deal with loose cannon officers playing by his own rules. Specifically referring to a "maniac" Gibbs whom is constantly putting his life on the line.[3]

Nick Valentine will rephrase the poem Ozymandias by Percy Bysshe Shelley to mock the large Mister Handy statue at the General Atomics Galleria.[10]

Behind one of the doors in the Fun House spinning floor room is a reference to Alfred Hitchcock's Psycho. In the room a manikin holds a combat knife in front of a shower with a skeleton shielding itself in the exact manner as the infamous shower scene.

The tricycle found on a red carpet in the center of a corridor inside Parsons State Insane Asylum is an allusion to the tricycle scene in the motion picture The Shining.

The Bar Harbor Bowling League once had a team called the "Holy Rollers,"[11] this is a reference to the bowling team of the same name on two episodes of the Simpsons; Team Homer and Penny-Wiseguys.

The holotape series The New Squirrel is a reference to the once popular children's toy Teddy Ruxpin. The narrator of the stories, Storytime Simon, sounds similar to the toy and all the holotapes are found next to Teddy bears.

In Somes Sound, northeast of The Nucleus, is a skeleton scene wherein a female skeleton in a blue dress is lying on a red door, while a skeleton is clutching to end of the door. They are both face to face. This is an allusion to the flooting door scene in the motion picture Titanic.

The access code that Shaun gives for full access to his terminal – "9003" – is the same as the one John Connor uses to fraudulently withdraw cash from an automated teller machine in Terminator 2: Judgment Day.

The placement of a male and female mannequin at Wixon's Shovel Museum resemble Grant Wood's painting American Gothic, only with the male holding a shovel instead of a pitchfork.

The Wonderful Wizard of Oz

The Protectron Tin Man is an allusion to the Tin Woodman in The Wonderful Wizard of Oz.