Merchants from the Capital Wasteland.

Merchants can be found at various locations throughout the Capital Wasteland in Fallout 3. 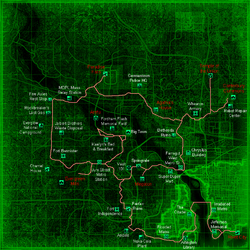 Most towns in the wasteland have merchants selling food and drink, with those in more prosperous settlements also offering weapons, armor, and clothing. Doctors can treat various ailments for a fee, and certain traders can repair the player's equipment.

In addition to these traders, there are also four caravan merchants traveling the DC wastes, with one dedicated to food and chems, one to weapons, a third to armor, and a forth to junk items. Other wastelanders can be found selling random, and sometimes rare, items. Special encounters with doctors, chem vendors, and hunters (food vendors) are also possible when traveling.

Merchant inventories will scale with the player's level, although certain advanced items such as power armor and plasma weapons will not normally be available. Prices are the same from store to store, but can be affected by the player's Barter skill.

Merchants will have a new inventory after a period of three days, and then again after four days, in order to correspond with the length of a week. Their inventories update at 12:00 AM, although the days these updates occur vary from player to player.

Any caps paid to merchants can be found in their inventories should they be killed.

Caravan merchants are named roving salesmen that carry goods across the wasteland. They travel accompanied by a single armed caravan guard, and a pack brahmin.

Crazy Wolfgang, Crow, Doc Hoff, and Lucky Harith can be encountered on their trade routes, stopping to sell their wares at various locations. Each merchant specializes in a specific category of item, and also offers repair services. Attacking any caravan merchant will result in all four caravan merchants refusing to trade with the player.

At Canterbury Commons, Uncle Roe offers the player a map showing the paths of the merchants and their various trade stops. He also gives the option of investing in any of the caravans. The player can choose to invest twice in each merchant, with 200 and then 500 caps (or 100 and then 250 with the Master Trader perk).

Investing in a caravan allows that merchant to sell a wider variety and higher quality of items, and increases the number of caps they have available when trading. It also raises their Repair skill (up to 75 in one case, with the second investment), allowing them to restore the player's equipment (i.e. weapons and apparel) to near perfect condition.

All caravan guards are equipped with R91 assault rifles and leather armor. They are significantly better combatants than most other human non-player characters, and are roughly on par with a non-player character companion or super mutant master in terms of durability. 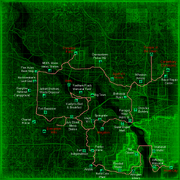 Each caravan follows the same route across the wastelands. They often use roads even though the roads are dilapidated. In order of travel, the merchants stop just outside each of the following areas:

The merchants cycle through the caravan waypoints in the same order: Doc Hoff, Crazy Wolfgang, Crow, then Lucky Harith. They move around the game world at different rates depending on whether time passes in real game-time, or wait-time. For example, if you are looking at Doc Hoff and use the Wait feature to jump ahead 2–3 hours, Crazy Wolfgang will appear there instead. However, if you do not use the Wait feature and actually stand there in real game-time, no one will appear for the next 5+ hours.

If you are outside one of the regular stop points and the merchant you want is not there, using the Wait feature to jump ahead 1–2 hours will force the next merchant in line to appear. Waiting for three days near a merchant will cause them to re-stock their inventory, while remaining in the same location.

Caravan merchants have more health than standard non-player characters, and their caravan guard bodyguards are significantly tougher than normal, even wearing their basic leather armor. Both the merchants and their guards also carry a couple of stimpaks for healing wounds in combat. Pack brahmin have a large amount of health, considerably more than a regular brahmin.

Nonetheless, caravan merchants are still susceptible to death due to the dangers of their routes: deathclaws, yao guai, Enclave soldiers, raiders and super mutants. Although the merchants usually slip by the danger if the player is not in the area, caravans may be attacked any time they are in the same area or cell as the player—regardless of whether they are visible or not. Certain areas of the route are extremely dangerous, for example the route from Megaton to Rivet City goes past Arlington Library and the Citadel, through Central DC, and across the super mutant-infested bridge across the pipes leading into Jefferson Memorial. As the player progresses along the main quest and achieves higher levels, the more powerful monsters will take a toll on the caravan merchants. The Enclave will establish camps directly on the caravan route or near enough to produce an encounter, which will pose a problem if the Merchant approaches the camp while you are in the area. Late in the game, it is not uncommon to see a lone merchant without either their pack brahmin or guard. Caravan merchants do not recover health and once they or their guards die, they do not respawn.

You can check to see if a Merchant is dead by talking with Uncle Roe and asking to invest. You cannot invest in a dead Merchant. Any surviving bodyguard will hang around Uncle Roe's house in Canterbury Commons. A dead pack brahmin, however, has been known to respawn. If the caravan merchant's brahmin survived, you may still encounter it fully stocked wandering the Wasteland.

On the PC you can recover the merchant using the console. See Recovering missing non-player character in Fallout 3 for details on how. However the guard and brahmin seem to exhibit AI-problems when recalled if the merchant has died once before. They will run ahead of the merchant rather than follow him around, and will get themselves killed again in seconds. Alternatively, on the PC you can set the merchants and their party to unkillable using the console command setessential BaseID 1 for each of the three entities in each party. Each merchant's BaseID and those of his followers can be looked up on the Form ID Page.

You may be able to stave off the demise of a caravan merchant by placing (reverse pickpocket) better armor, weapons, ammunition and stimpaks on them and their bodyguard. You should have a decent Sneak skill in order to add items without being detected very often, or use a Stealth Boy to help as well as clothing that adds to Agility to make the process easier. Save before you attempt to place anything, because a pickpocket failure will cause them to turn hostile. Assuming you do this at Megaton, after you place armor or weapons on them you should go into Megaton through the door, turn around and come back out to see whether or not they have equipped the new armor or weapon. The stats and/or condition of the new weapon or armor will likely need to be higher than what they currently have before they will equip it.