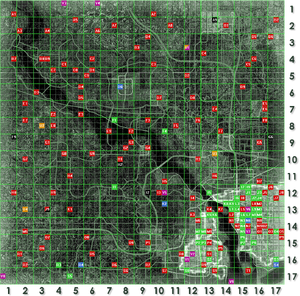 A map of the Capital Wasteland

Without any of the available add-ons installed, there are 163 marked locations in Fallout 3 provided you have the Lawbringer perk; without it there are only 162 as the Regulator HQ is not available. It should also be noted that the Vault 101 map marker is not counted in the Pip-Boy 3000 "discovered locations" statistic, resulting in a maximum displayed value of 162 discovered locations (161 without Lawbringer).

Adams Air Force Base can only be accessed if you have the add-on Broken Steel.

The Pitt can only be accessed if you have the add-on The Pitt.