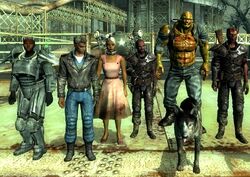 There are 8 permanent companions available to the player in Fallout 3. Most have a Karma requirement that must be met if the player wishes to enlist that companion (listed here in parentheses).

If you ever tell a companion to wait, and do not remember where they were left, Travel to The Pitt. This will send your companion home. (Does not work with Point Lookout, unknown for other addons.)

The player can have up to two companions in their party which consists of Dogmeat plus any one other companion, barring certain companion exploits.

Unlike previous Fallout games, companions don't gain experience and notoriety independently but are scaled to the level of the player.

The player earns full XP if able to do the majority of the damage that kills the opponent (you get zero XP for a kill unless you manage to do at least 30% of the damage). A killing blow is not necessary to get XP but you will not be given XP if too little damage has been done. 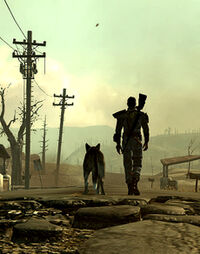 Companions come with their default weapons and armor and will use these, depending on what role you ask them to play (melee or ranged). They will also wear any weapons or armor they are given that is superior to their standard equipment. All human or ghoul non-player characters are capable of wearing power armor (i.e. all but Dogmeat, Fawkes & Sergeant RL-3). Armor and weapons worn by companions never degrade with use.

Companions have unlimited ammunition for their standard weapon (With the exception of Butch), but you'll have to supply them with the appropriate ammunition for any other non-default ranged weapon.

If a companion is given several weapons and the appropriate ammunition, they will generally choose a weapon based on the range of the projectile, then on either damage per round (DPR) or damage per second (DPS) but not by the in-game interface's DMG stat. For example, if you equip Star Paladin Cross with a flamer, she will first attack with her default laser pistol because her target is out of the flamer's range. She will move towards the target to get into the flamer's range and then switch to it. There are exceptions, however. For example, Charon will always use Protectron's Gaze (a unique laser pistol) over the laser rifle, despite its reduced range AND damage per round rating.

Some companions will use any weapon if you give it to them (provided they have appropriate ammunition for it). There are some exceptions however, for example companions cannot use the Gauss rifle rewarded upon completion of the Operation: Anchorage add-on, but can utilize the sim-only version obtainable through glitching or console.

Companions have significantly more health than other non-player characters.

Enemies are able to shoot your companions weapons out of his hand (except default weapon), so take care if you give him any unique weapon.

Companions are restored to full health at the end of combat, after all nearby enemies are dead. However, if you zone out during a fight and they follow while injured, or if they are injured outside of combat (e.g. a booby-trap), they do not heal (until after the next combat). They can also use stimpaks in their inventory in the middle of battle, if you gave some to them earlier. Dogmeat can't carry stimpaks, but you can speak to him in the middle of combat to heal him manually. You can check companions' health by viewing them in V.A.T.S. mode, or moving far enough from them to see their HP bar. Companions are not considered 'vital' non-player characters, so they will die if their health is fully depleted, there is no way of reviving them, unless using the 'resurrect' command via console targeted on their corpse.

Temporary companions are companions that will join you during a quest. Most of them will follow you indefinitely until you complete their related quest, but not all. Unlike permanent companions, they do not heal automatically at the end of a battle but must be given stimpaks through reverse pickpocketing or healed through dialog (still requiring a stimpak from your inventory). Most of them can use weapons and armors. And because they are non-player character, they can use weapons forever with only one bullet. There are some hostile non-player characters which could become not hostile to player and Permanent Companions, but they still attack Temporary companions.(like Arkansas, protectrons in RobCo Facility). And traps of allies like Mines in Big Town still hostile to Temporary Companions. So you should take care of that non-player characters and traps first, then you can travel with Temporary Companions more safety.

Of the listed temporary companions, only Red, Shorty, and Sticky have dialogue options which allow the player to give them weapons or other inventory items.

James is scripted as though he were a permanent companion; for example, he uses up ammunition on playable weapons, something only permanent companions do. However, his package is "escort" instead of "follow", so he can't be taken places like a normal companion can be.