On the PC, many non-player character, quest, and player-getting-stuck issues can be resolved through the use of console commands.

Crashing, freezing and other hardware- or software-related issues

Stuttering, crashing, freezing, and slow-down issues are often hardware- and/or software-related. Please visit the Bethesda Fallout 3 hardware forums for information regarding these issues. In particular, read through the stickied threads at the top of the forum pages. 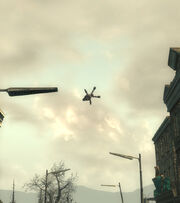 The player character is stuck

In locations where fast-travel is not an option, it is possible to become unstuck by utilizing frag grenades or mines to dislodge the player with force. And if there are enemies nearby, you can simply let them kill you. And if your last save/autosave isn't too far away from where you are stuck, you can load it.

Floating in the air

Due to clipping and pathing issues, non-player characters, creatures, and items will sometimes appear to float in the air. The following are some common instances:

Small objects such as stimpaks and other drugs, small books, tools, ashtrays, and the like may appear to float slightly above shelves until one of the group is removed, at which point the rest drop into place.

Falling out of the map

Non-player characters and the player character may occasionally fall through the map or into a wall or other object. Following are some commonly known locations where this is likely to happen.

"Clipping" is the term for objects passing through one another. Clipping can lead to the flying creatures and items, the falling out of the map and the stuck glitches. Items with clipping issues may not be visible. It is possible for a land-mine to be clipped slightly into the ground, making it difficult to see, but still functional and dangerous. (Just like a real one!)

Some pieces of armor and clothing exhibit clipping when worn in conjunction with each other.

Creatures, items and non-player characters sometimes spawn partially inside a surface. This can cause them to jitter, vibrate, or make noise. As a result, items sometimes cannot be picked up or moved. Common instances of this glitch follow.

Sometimes non-player characters' various body parts are of different ethnicities. This is most common in Talon Company mercs and Regulators

Sometimes when roaming the wasteland all textures and models will stretching themselves and cover the screen making a strobe effect while moving and look at the sun. This is fixed when moving out of the certain area, either by walking or fast traveling, however you can still be attacked while walking making it very difficult to attack back.

Following are some reported circumstances under which crashing and freezing occurred.

Any non-player character in Megaton may fall off the various high places in town and die or disappear from the town. Please see Recovering missing NPC in Fallout 3 for more details.

There are many instances of spoken dialogue not taking into account the proper gender of a character. Common occurrences follow:

After an non-player character dies, their voice may still play, especially giving the warnings about not stealing things.

Speaking to male children will crash the game

Strangely, speaking to young boys will cause the game to crash shortly after dialogue begins in certain playthroughs. This includes Derek Pacion, Bryan Wilks, and all of the Little Lamplight residents with the exception of Mayor MacCready.

Common issues with all followers

Any quest item may get stuck permanently in your inventory. However, even though the item displays a weight on the PipBoy screen, that weight does not count toward your total carry weight.

Occasionally when going into V.A.T.S. the camera will move down and to left, usually only able to see the legs and lower torso, you can still use V.A.T.S. while glitched like this but you might not know where you hitting. This is fixed by going out of then back into V.A.T.S.

Crashing and other hardware- or software-related issues

Stuttering, crashing, freezing, and slow-down issues are often hardware- and/or software-related. Please visit the Bethesda forums for information regarding these issues. In particular, read through the stickied threads at the top of the forum page. Common pc-only crashes and freezes occur under the following circumstances: