Welcome
Welcome to The Vault
The Fallout wiki with 162,798 pages (33,202 articles) since February 7, 2005‎.
We are continuously building the finest guide to the Fallout series, and you can help!

Featured article
Template:Featured article/Fallout 3 Wiki/7
About Fallout 3
Fallout 3 is a post-apocalyptic computer and console role-playing game that has been developed and published by Bethesda Softworks as a sequel to Interplay's Fallout and Fallout 2.

The game takes place in the year 2277 on the East Coast of what used to be the United States of America. The player character, known as the Lone Wanderer, is a young inhabitant of Vault 101, a fallout shelter in the Washington D.C. area. The vault has reportedly been sealed for 200 years, until the player's father, James, opens the only door to the outside world and disappears without any explanation. 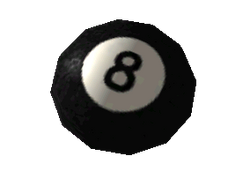 The Lucky 8 Ball, awarded for completing Big Trouble in Big Town.
The Vault in other languages