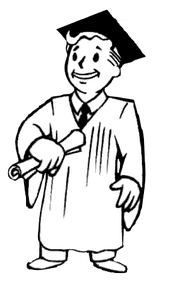 XP in Fallout is a conventional type similar to Dungeons and Dragons where levels are separated by large amount of experience. For example, you need 1,000 XP to reach level 2, 3,000 for level 3, 6,000 for level 4, and so on.

Fallout 2's XP system is similar to Fallout's. The only major difference is that leveling requires more XP than in Fallout.

Changing the difficulty level will also change experience gained from killing enemies. On Very Hard you will receive 150% of the regular experience for a kill, while a kill on Very Easy will only yield 50%. For example, a deathclaw is worth 25 XP on Very Easy, 50 XP on Normal and 75 XP on Very Hard.

While this means that you can gain up to three times as much experience from fights on Very Hard compared to Very Easy, this is somewhat compensated by the enemies being much tougher. In the end, it depends on the player's skills and play style which difficulty setting allows for faster leveling. Some people play on Very Easy until their enemy is about to die and then change the difficulty to Very Hard and finish them off to get the XP amount from being on the Very Hard difficulty.

XP caps at level 20 on all difficulties without installation of the Broken Steel add-on. Installing the add-on increases the cap to 30.

Fallout: New Vegas, however, does not reward XP increases based on the level of difficulty selected, despite the manual (PC version) stating otherwise. This somewhat alleviates the stress encountered while playing the game simultaneously on Hardcore mode, as it is not necessary to play it on Very Hard. No additional trophy/achievement is awarded to those who play the game on Very Hard nor do you gain bonus XP.

Unlike in Fallout 3, Fallout: New Vegas awards XP for kills made by companions. This increases the usefulness of followers and significantly reduces the hassle of having to compete with them for XP.

Experience is awarded for kills, crafting, and accomplishing quests. The game uses a base value for all quest completion rewards, modified later by the game:

Experience in Fallout Tactics are given to all party members, regardless of the number of members. The game does not feature difficulty modifiers, however the Tough Guy game mode can provide 100% XP bonus.

Experience in Fallout Shelter is tied to individual dwellers rather than the player/overseer. Experience can be gained by successful rushing, stopping incidents and killing enemies, or more gradually over time.